On the night of the 24th of January, I tread into the pop temple of the city of Groningen: Vera at the Oosterstraat. This local theatre has gained its reputation thanks to a number of legendary concerts in the 80s and 90s, such as the live performances of Nirvana, Joy Division, Nick Cave & the Bad Seeds, among others. To this date, it remains the cool centre for underground culture in the Northern capital. Tonight, though, the audience looks different. The usual young, hip concertgoers are mixed with old socialists, history aficionados, and regionalists. Meindert Talma, Frisian historian and cult musician is presenting his concept album De Domela Passie, inspired by the 100th anniversary of the death of Ferdinand Domela Nieuwenhuis, mythical figure of Dutch socialism.

Every reformist walks down a via dolorosa 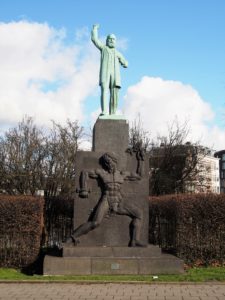 Ferdinand Domela Nieuwenhuis (1846-1919) followed on his father’s footsteps and became a protestant pastor early in life in the Frisian city of Harlingen. As an Evangelical Lutheran, Domela was allowed to marry, and did so on four occasions: every single time with women called Johanna. Three of these marriages ended in tragedy, as his first three wives died during childbirth. The horror of losing three partners and four children caused Domela to steer away from God, and to focus his time on relieving the earthly suffering of his fellow women and men. Somewhere along the way, the first prominent Dutch socialist was born. Domela began to tour the North of the Netherlands, appearing at crowded halls to give impassioned, yet stern speeches about the ideas of Marx and Proudhon.

Domela wrote extensively against the five Ks: Kerk, Koning, Kapitaal, Kazerne en Kroeg (church, king, the capital, barracks and the pub). There are accounts of people traveling on bicycles and horses for hours to catch a glimpse of the man who fought for the underclass of the North. Much like photographs of Mao and Stalin, countless Northern households had a portrait of Domela hanging in their living rooms.

During his political career, Domela formed part of the early days of the Alliance for Universal Suffrage and was the first socialist to be elected to Dutch parliament. He fought for the 8-hour work day, the introduction of the minimum wage, free and universal education, amongst other causes. Most of his proposals were rejected by Parliament, which resulted in him growing increasingly resentful of the parliamentary system, to the point in which he finally lost faith in socialism and democracy altogether, and converted to anarchism.

A cross between a pop opera and a Wikipedia page

Journalist Jan Vollaard described De Domela Passie with these harsh, but not completely untrue words. Talma plays his Passion perfectly chronologically, and sings mostly in the first person. Metaphors are scarce, and he seems to shy away from any kind of judgment on the life, times and actions of Domela. For him, the facts about his life speak loudly enough. The twenty-piece chorus on stage gives the material life and sonic depth, and lovely emotional moments are reached on pieces like Rights for Everyone and Buried in the Heart of the Proletariat.

Why should you not attend this performance/listen to this record?

Talma’s performance and recording is of more historical rather than musical value: Talma himself is a storyteller rather than a consummate performer. Lyrically, some pieces are quite literal, and fail to evoke the sense of epic storytelling Talma aims to. Naturally, as a pop record, De Domela Passie falls short of being an extensive account of Domela and his times, but it works as an excellent introduction to the character, an as an invitation to the casual listener to learn more about the subject matter.

Why should you attend this performance?

Talma’s choral arrangements are clever and the strings add a layer of complexity that could have not been reached with his usual four-piece rock group. Fact remains that the music is not the focal point of the performance. It is the occasion, and it is the myth and unlikely story of the preacher turned agitator. Even Talma’s sometimes stiff and restrained performance seems to skillfully exemplify the Domela credo of Nothern sobriety.

De Domela Passie is a reminder to educators and students of history that histories that might seem remote or even long dead, can be found in contemporary manifestations, even decades after they originally took place. The EuroClio/IHJR project Contested Histories has identified statues, memorials, street names and other representations in public spaces of disputed historical legacies. De Domela Passie is an example of such a manifestation, but organically appearing in popular culture. This record encourages pupil and teacher to stay observant and curious, as representations and iterations of the topics discussed in class can be found virtually anywhere.

The performance is available on streaming on Spotify. Tickets for live shows: meinderttalma.nl.