European histories are most prone to conflicting interpretations in places where national borders shifted repeatedly and local communities were uprooted or new communities settled in. To integrate these border dialogues in the classroom, EuroClio’s Sharing European Histories project supported efforts by the EUscreen Foundation to develop learning activities about borders and their significance in European history. The resulting educational  project (Re)Viewing European Stories has now published three ready-to-use innovative learning activities, which make creative use of audiovisual content from the EUscreen and Europeana archives. The activities encourage students to widen their perspectives and provide better context to many events in twentieth century European history, making them useful for any national curriculum. Additionally, the activities put personal stories at the center of students’ engagement, promote critical historical thinking, develop media literacy skills, and give students and teachers the flexibility they need to adapt them to their own learning goals.

(Re)Viewing European Stories kicked off in October 2019, when a team of archival practitioners, historians and educators, as well as external experts convened in Warsaw to come up with ideas for engaging and interactive learning activities provoking critical thinking, while also using digital source materials and enhancing media literacy. The team settled on exploring the themes of migration and movement around three short films made by The European Network for Remembrance and Solidarity, one of the contributors, in their 2017 In Between project. The films investigated the dynamics of history and remembrance in three European borderlands, which suffered from big changes and upheavals in the twentieth century. By displaying oral history research in the chosen regions, the films allow students to engage with local and personal stories, before connecting them to the bigger historical context. The depicted borderlands include the Polish-Lithuanian border, where different groups of people have lived together for centuries while the borders drastically changed during 20th century,  the Bosnian town of Mostar, which found itself at the crossroads of the Yugoslav Wars of the 1990s, and the Catalan cross-border region, where many Spaniards attempted to flee the Franco regime at the conclusion of the Spanish Civil War.

In December 2020, the team finished their work and the completed activities are now freely available for teachers to use in their classrooms. All learning activities come with a premade package of learning materials, including information packs, step-by-step activity plans, and stimulating visuals. The intended age of students varies between 11 and 18 years old. The activities are initially designed for two lessons of forty-five minutes each, but can be adapted to suit any teacher’s needs.

The project’s learning activities have been published here under EuroClio’s educational materials or can be downloaded directly from the EUscreen Blog: 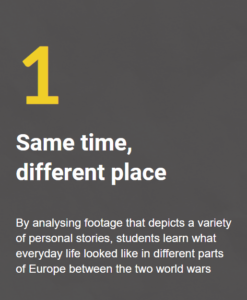 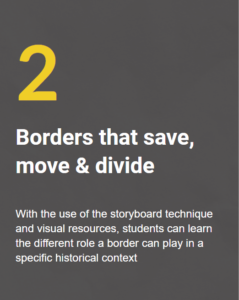 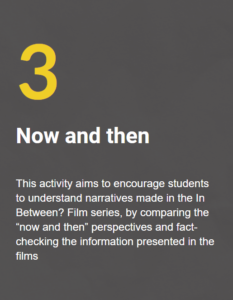 Visit the EUscreen blog for more information on the development of (Re)Viewing European Stories:

The History of the project: http://blog.euscreen.eu/2019/12/reviewing-european-stories-co-creation-workshop/

(Re)Viewing European Stories is coordinated by the EUscreen Foundation, funded by the Evens Foundation and supported by EuroClio as part of the Sharing European Histories project. The project brought together archival practitioners, historians and educators, as well as external experts from a number of European countries: Documenta – center for dealing with the past (Croatia), Borderland Foundation (Poland), European Observatory on Memories (Spain), European Network Remembrance and Solidarity (Poland and others), National Film Archive – Audiovisual Institute (Poland), Netherlands Institute for Sound and Vision (Netherlands), with Jacek Staniszewski (Poland), a history teacher and EuroClio ambassador, serving as an independent education lead.

From April 5-7, the Kick-off meeting for the Sharing European Histories Project was held in parallel to the Annual Conference in Gdansk. EuroClio partnered with the Evens Foundation on this project because both organizations believe that opening up a space to engage with the dissonant and often conflicting nature of European history is the first step in discovering common positions or overcoming divisions while acknowledging existing differences. On behalf of the Evens Foundation, Chairwoman Monique Canto-Sperber welcomed participants to the conference during the opening cermony, introducing the Sharing European Histories project.

The Sharing European Histories Project aims to inspire and support history educators across Europe since we find that history educators are uniquely positioned to engage young people in confronting the dominant national narratives of history to overcome the divisions between nations and cultures.Back in September 2018 EuroClio and Evens Foundation put out a call for applicants; from over 70 applications received, two project partner organizations and five individual contributors were selected to join the Sharing European Histories project team. Rounding out the project team are two teacher trainers, Richard Kennett and Iryna Kostyuk, who will work with the individual contributors to help them develop their projects.

During the kick-off meeting all the team members had an opportunity to introduce their project ideas. Individual contributor, Helen Snelson, from the UK, shared her proposal for an oral history collection on how people around Europe experienced the end of cold war. Gentian Dedja, from Albania, proposed a practice that explores local historical heroes in cross border contexts to demonstrate how historical figures can surpass national prejudices. Elisabete Pereira, from Portugal, proposed a study of the hidden history of objects that explores the life cycle of their development and circulation around Europe and the globe. Presented in workshop at the Annual Conference, Juan Carlos Ocana, from Spain shared his proposal for actives that help history and citizenship educators confront the complex issues of Jihadist terrorism and the rise of the radical right in Europe in their classroom. In another workshop Joanna Wojdon, from Poland, demonstrated her proposed resource which explores how the historical thinking concept of continuity and change in historical events and processes changes perception depending on different perspectives.

Our project partners also shared their proposed projects with conference members during the Marketplace of Ideas. Sonja de Leeuw from EUscreen in partnership with Maja Drabczyk from National Film Archive-Audio Visual Institute, Poland (FINA) and Karolina Dziełak from the European Network Remembrance and Solidarity (ENRS), shared their project proposal to develop interactive learning activates which explore migration in Europe using EUscreen’s large collection of digitized audio-visual sources. From the Croatian History Teacher’s Association (HUNP), Vedran Ristic shared the proposal for a project to investigate local material heritage and the personal stories connected to these materials from a contemporary global perspective.

The team decided that the individual contributors will spend the next year working with the teacher trainers to create a set of unified teaching strategies that form the basis of their proposed projects. These strategies will be peer-reviews and published on Historiana so teachers from across the globe can use them to teach history in a way that respects diversity, counters nationalist narratives, and promotes a critical enquiry about the past. Additionally, the individual contributors and project partners will be sharing the outcome of their proposed projects next year at the EuroClio Annual Conference 2020 in Serbia. Keep an eye out for further updates on this exciting project!