The fourth training of the Learning to Disagree project took place in Utrecht (The Netherlands) from 19 to 21 August 2019 and was organised by EUROCLIO and Utrecht University. For the training 23 history and citizenship educators were present from the following 16 countries: Bulgaria, Croatia, Denmark, Estonia, Finland, France, Germany, Hungary, Ireland, Italy, the Netherlands, Serbia, Slovakia, Slovenia, Spain, Turkey and United Kingdom. This includes staff of the project partners, and a core team of Historiana volunteers that was formed during the previous short-term training that took place in 2018 Serbia. During this training, they continued to work more intensively on the project results, especially on  the historical content that will be featured on Historiana[1], lesson plans that will accompany the content, and National Trainings that will be organised between February and July 2020 to disseminate the final products to the wider community of history educators.

This meeting was conducted within the framework of the EUROCLIO-led Erasmus+ project “Learning to Disagree” (L2D) which runs from September 2017 – August 2020.

The 3-day training consisted of a variety of activities that were relevant to the project topic, including the visualisation of the online environment where the final results will be published. In addition, participants received an active training session on multiperspectivity in history education. There were also 11 active workshops on the leasson plans developed by the core team, and an interactive session (World Café) on controversial buildings, monuments, and changing street names in the countries represented at the training. Further work was done on the Variety of Viewpoints, one of the key project outputs, and finally the participants learned more about the controversy around street names related to the colonial past of the Netherlands.

The main aims of this meeting were:

[1] Historiana is a webplatform build by EUROCLIO that Historiana offers free historical content, ready to use learning activities, and innovative digital tools made by and for history educators across Europe. For more information see: https://www.historiana.eu

In “Opening up Historiana” EuroClio will involve more people and organisations in the development and use of Historiana. In the 3rd transnational project meeting new ideas for the activity builder on Historiana will be developed. Also tools and the further development of partner pages will be discussed in this closed meeting.

In the early stage of the Learning to Disagree project, Georg Eckert Institute researchers performed a needs assessment, to collect the opinions and input from educators on the issue of debate, dialogue, and discussion in the classroom. Six focus group discussions were held, involving 25 participants from 23 European countries. Based on the data collected, a survey was developed, which gathered information from 117 respondents.

A number of findings were made based on the data collected. Firstly, the inquiry identified a working definition of contested issues, which refer mostly to disputes based on competing, often irreconcilable values. Contested issues were mostly found in recent history, and were often of a national rather than international character. Concrete examples of contested issues teachers deal with in the classroom are both World Wars, Fascism, Communism, the Cold War, and migration, among others.

Participants of the focus groups and respondents from the survey identified dialogue, discussions and debates as tools of paramount importance in order to encourage students to deal with multiple perspectives on contested issues. The ability of educators to implement these tools is often hindered by factors such as a lack of resources representing different viewpoints, the duty of neutrality of educators, ingrained nationalism in society, and political pressure by authorities.

From the data collected, three main teaching approaches to contested issues were identified: the critical thinking, the “battling” stereotypes and the creation of empathy approaches. The critical thinking approach is based on critical assessment of sources taken from a variety of perspectives, underlining how different societal groups experienced the same events differently, and encouraging an understanding of history as a complex, multi-perspective discipline. Secondly, the “battling” stereotypes engages students directly on biases they may have. Students are confronted with the historical wrongdoings of their own social groups, and challenged on their potential lack of knowledge on minorities and other perspectives. Lastly, the creating empathy approach attempts emotionally engage students in order to prompt feelings of genuine interest and care, which will aid the creation of empathy in the classroom.

These findings identified in the Preliminary Needs Assessment will inform the creation of material for the next intellectual outputs of the Learning to Disagree project, such as the exemplar content the teacher’s guides, the training package and, eventually, the recommendations to policymakers.

From 22 to 25 March, the Learning a History that is ‘not yet History’ (LHH) Group has met up in Belgrade and Topola to have a training event. This was also their last meeting for this part of the project. On the first day of the event, the LHH group gathered at the EU Info Centre in Belgrade to hold a Stakeholder’s Dialogue. The goal of the stakeholder’s dialogue was to reflect on previous initiatives and achievements in the field of responsible education in the Western Balkan and to come up with a regional strategy for future work on regional cooperation in history education. After that, they moved to Hotel Oplenac in Topola for two days to participate in workshops (both for the LHH project and Learning to Disagree project) and have a future active planning session. There was also the official launch of the devedesete.net website by Aleksandar Todosijević and Miljenko Hajdarović. This website offers a variety of multi-lingual sources on the wars in the 90’s. The overarching theme of workshops was to show new ways of teaching about the former Yugoslavia wars in the 1990’s. The War(s) in Photos workshop, developed by Nataša Kostić and Bojana Dujković Blagojević, explored how utilizing real pictures of the events and making students discuss different the elements they contain can make it easier to put events in perspective. 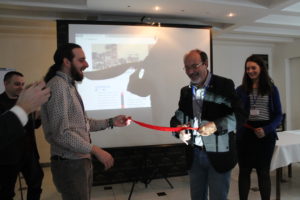 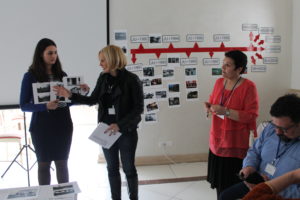 The future active planning session took place on the final day of the Topola event. In it was discussed how the history teachers associations want to move ahead and what would be the best way for regional cooperation. It was clear that there is great enthusiasm within the LHH group to continue cooperating in order to achieve the project goals, and it was emphasized that EuroClio should be a part of this despite the leaving of Director Jonathan Even-Zohar. EUROLCIO is very satisfied with the events in Serbia and looks forward to the inevitable progress that future cooperation will bring.