The Conference of the Americas on International Education (CAIE), whose seventh edition will be held in virtual mode with a possible face-to-face component for those interested, convenes researchers and academics, specialists and representatives from civil society, to submit proposals for posters or parallel sessions that, in line with this year’s main theme, motivate conversations on the ways in which international academic collaboration contribute to the global knowledge community to accelerate the pace and broaden the scope of our academic and scientific contributions to ultimately achieve collaborative solutions to our shared challenges.

The posters and parallel sessions will be presented during the event on the CAEI 2021 virtual platform. 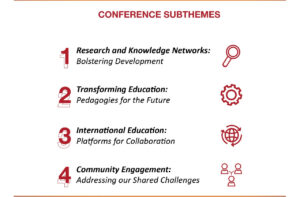 The recent outbreak of the COVID-19 pandemic and the consequent challenges and changes experienced, have led to discussions over key social and educational concepts, such as, racism, equity, nationality, empathy, diversity, and technology. These concepts form a basis for discourse on their role in intercultural education. In light of this, the International Association for Intercultural Education (IAIE) is organising a conference in which a variety of topics relevant to the current global situation, as well as other intercultural topics will be discussed. The conference will take place on June 27-30, 2021.

The conference will include a number of strands, such as peace education, cooperative and collaborative learning in multicultural settings, language awareness, history education and multiculturality among others. You may find the full list here.

Your proposal must choose one of the strands and present it in a selected format. This may be in the form of a lecture, online lecture, discussion panel, workshop, poster, round table, or field trip.

Before submitting your abstract you must register on the submission system EasyChair. The abstract must be written and submitted in English. Note the abstract should be between 300-400 words, contain 3-5 keywords, as well as 3-5 bibliographical references.

The Moroccan Center for Civic Education and the Ministry of Education Regional Academy for Education and Training, Laayoune- Sakia El Hamra, in collaboration with their international partners take the great pleasure in announcing the 3rd Annual International Conference on Education for Democratic Citizenship (EDC), which will be held in Laayoune, Morocco from December 07 to 10, 2016.

The Conference theme is: "Promoting Peace, Non-violence and Cultural Understanding through Education", and aims to engage with a broad range of interconnected topics that all deal with societal improvements and empowerment of youth, women, and civic engagement through bettering societal mechanisms and structures.

Conjointly, registration for the conference as well as a call for papers have been announced. The deadline for submitting abstracts is October 31st, 2016, and the final deadline for international participant registration is on November 20th, 2016.

In order to read more about the conference, register for it, or to sign up for submitting an abstract, visit the page below.

On the occasion of the Centennial of what is commonly referred to as the Armenian Genocide, academics and professionals from a variety of disciplines and countries came on 5 to 7 March together in The Hague, the Netherlands, to celebrate a conference where discuss the impact of this event in their respective fields. EuroClio Founder and Special Advisor Joke van der Leeuw-Roord and Trainee Ivan Markovic attended the event and report: Alexis Demirdjian, a Trial Attorney at the International Criminal Tribunal for the former Yugoslavia, the NIOD the Dutch Institute for War, Holocaust and Genocide Studies and the University of Southern California – Dornsife Institute of Armenian Studies were co-hosting this conference. The contributions are brought together in a publication questioning the relevance of the Genocide today and its impact on the fields of study of Law, History, Anthropology, Political Science, Sociology, Literature, Education and Media Studies.

The conference opened with a public event showing, “Grandma’s Tattoos”, a film by Suzanne Khardalian, which features the story of her grandmother and many other untold stories of other Armenian women who were kidnapped, sexually abused, and tattooed during the atrocities. The well-known American/Armenian historian Dr. Ronald Suny introduced public and experts into the main findings of his new publication A history of the Armenian genocide. After his introductory talk a wide range of speakers addressed very topical issues such as Armenia and the G-Word: the law and the politics, compensation for the Armenian Genocide, media coverage of the current discourse relating to the event in Turkey and the demolishing of the monument related to the genocide in 2011 in Kars, Turkey.

An intercultural dialogue was unfortunately absent despite the wish of the organisers to have a critical discussion on the impact of the Genocide. The discourse in the conference was hampered to the fact that too many speakers needed more time than allocated to their presentations. It was therefore impossible for the audience to ask questions let alone to commend.

EuroClio was invited to participate in the International Conference “Remembering the Past and Building the Future together” of the Pädagogischer Austauschdienst (PAD) 26/27 May 2014 in Bonn. Over 200 participants from various pedagogical professions came together to discuss and discover the roles international exchange projects between schools can play within international cooperation of schools and how they can be designed. These topics were explored through various Q&A’s and thematic workshops. One of these workshops was hosted by the Historiana Learning team and showed the participants the various ways in which Historiana contributes to internationalisation and innovation of history education. Furthermore, EuroClio deputy-director Steven Stegers gave a speech to the PAD audience about responsible history in a globalising society which was enthusiastically received by the public.

Besides participation in the PAD Conference, the Historiana Learning Team worked on the final editing of the learning section of Historiana during multiple work sessions from 24 until 28 May. These sessions were very productive and the team worked intensively together on various important topics related to the launch of Historiana First World War Module in July. Bonn also proved to be an inspiring city for the members of the Learning Team as everyone resumed to work with fresh ideas after a visit to ‘Haus der Geschichte’ and participating in other cultural activities.