Then, we encourage you to apply to become a Member of the EuroClio Board. To apply, please read carefully this document, and fill in the form that you can find at this link by Thursday 25 February at 13:00 CET.

As a member-driven organization, EuroClio is led by a General Assembly, an elected international Board of volunteers (governance experts and history educators) and run by a professional Secretariat. The Board acts as a Supervisory Board, tasked with the overall responsibility for governing the organisation and to ensure wide and successful implementation of its core mission.

The Board supervises the work of the Director, who manages the Secretariat. The Board and Secretariat work together in a Finance and a Membership Committee and meet at least 3 times a year.

The EuroClio Board is composed of 5 members, who are elected for a period of 3 years, with the possibility to be re-elected once. On 10 April 2021, current EuroClio President Riitta Mikkola will terminate her second mandate, and a new Board Member will be elected by the General Assembly.

What are we looking for

We are looking for Members of the EuroClio Board that are:

However, please do not be afraid to apply even if you do not tick all the boxes. EuroClio is first and foremost interested into education, and we will be glad to help you learn more about the Association’s governance and the work of the Board.

What do we offer to Board Members?

To apply, please fill in the Board Application form that you can find at this link by Thursday 25 February at 13:00 CET.

In the form, you are asked to touch upon:

Board Members are selected by the General Assembly. In 2021, the selection process will follow these steps:

EuroClio was saddened to learn that former Dutch Prime Minister Wim Kok passed away on Saturday 20th October 2018. Mr Kok acted as an Honorary Board Member of EuroClio as someone who supported our mission. On behalf of the Association, the EuroClio Board would like to offer its condolences to his close family and friends.

At the General Assembly 2018 in Marseille, France, Lóa Steinunn Kristjánsdóttir formally stepped down as President of the Board. Mrs. Steinunn Kristjánsdóttir was elected to the Board in 2012, and held positions on the membership committee and as Vice-President, before finally becoming President of the Board in 2016. In the past, she has been involved as a contributor to the web application initiative Historiana – Your Tool to the Past on rights and responsibilities.

“EuroClio has benefited immeasurably from her knowledge and guidance over the years, and is grateful for all her commitment and dedication,” Steven Stegers, Acting Executive Director, stated in Marseille. “We wish her all the best and look forward to continuing to work with her as an Ambassador of EuroClio.”

EuroClio is excited to welcome Mire Mladenovski as the new President of the Board. Having been elected as a Board Member in 2013, Mr. Mladenovski served as its Treasurer for four years, and has shown undying support for numerous EuroClio projects, most notably serving as an editor for Historiana. In addition to his work with EuroClio, he is one of the founders and current President of the ANIM (History Teachers Association of Macedonia), as well as having co-authored and edited supplementary teaching material for secondary school history curricula, such as Understanding a Shared Past, Learning for the Future and Ordinary People in an Extraordinary Country.

The EuroClio Board of Members is now composed of Mire Mladenosvki as President, Paolo Ceccoli as Vice-President, Riitta Mikkola as Treasurer, Sinéad Fitzsimons as Secretary, and Frank van den Akker as Board Member. EuroClio looks forward to a productive term under their leadership.

The EuroClio Board met in The Hague on 9-10 September in order to take the next step in setting strategic priorities for the Board to address in the coming two years. In the previous Board Meeting, in Leiden, The Netherlands, EuroClio Executive Director proposed to the Supervisory Board a set of current challenges.

With all the exciting projects and ongoing events, conferences and exchanges, we have in our organisations, it was very important we had a chances to get a good birds-eye view on the present to plan a head for the future. We will work more closer together with our members to strengthen our organisation which is going to celebrate 25 years next year.
- Loa Kristjansdottir, EuroClio President

During the first day in the September Board Meeting, the Board was presented a specified overview of ongoing engagements of the organisations. This helped the Board to identify the extent to which each project and activity supports member engagement, improves the quality of member services and has a viable impact on the association and beyond.

On the second day, the Board worked in its two subcommittees - Finances and Membership - to elaborate in details the current situation of the organisation and plan ahead. Following the committee work, the Board took some key decisions on the way forward, including a set of priorities for the coming two years, a framework for the forthcoming 25th year anniversary of the organisation and the decision on the location of the 2018 Annual Conference.

There was also a good opportunity for the EuroClio Board to meet at the secretariat with the new trainees and Dutch EuroClio Ambassadors for an intercultural evening.

The next Board Meeting is scheduled for the 14-15 January.

The board met in the beautiful city of Leiden on 13th – 15th of May. The main purpose of the meeting was team building. Apart from standard board work we had active work on EuroClio's bigger picture, overall picture on EuroClio's work, policies, actions, services and vision. Jonathan prepared a session on for us, thank you Jonathan for that. And we had a very fruitful discussions and dialogue on the vision for the future. For the venue of meeting we enjoyed the hospitality of an NGO in the city housed in an old building that was originally an orphanage. I am sure that the nice surrounding made our work more fruitful and certainly more enjoyable. Also, I am happy to say that our two new board members, Frank van den Akker, our special financial adviser, and Sinaéd Fitzsimons who was elected at the GA in Belfast did very well and I am looking forward to working with the board further on the vision and what kind of EuroClio we want to be. 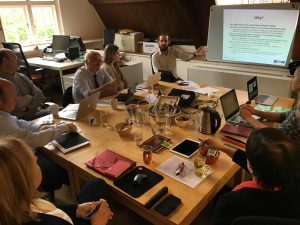 Each year, EuroClio - Inspiring History and Citizenship Educators holds its General Assembly during the Annual Professional Training and Development Conference. In 2016 the Assembly will include elections for a new Board Member. Individuals are kindly invited to apply as new candidate for Board Membership. Applications should be received before February 22nd 2016, by using the Board Candidacy Form. The elections will take place at the General Assembly on 24th March, in Belfast. For more information about the Board Responsibilities, please have a look at our statutes.

We kindly ask you to forward this Call to your association’s membership and/or relevant networks.

On 11-12 December, the EuroClio Board convened in The Hague. The meeting dealt with a variety of issues in the area of governance, financial supervision and planning. There was also time to brainstorm on future activities and to obtain a detailed update by the EuroClio staff members. The main focus however was to analyse and assess the feedback given by the members in the recent survey. This survey, prepared by the Board’s Membership Committee, queried the members ideas about membership services, fees and also asked current members for inputs on potential future membership systems. The meeting was fruitful and resulted in clear next steps toward the General Assembly in Belfast on 24 March 2016.

On 11 September the EuroClio Board and Secretariat met online for the second board meeting of 2015. The Board Committee structure that was initiated during the Board Meeting in Speyer in October 2014 is now fully functioning and the results of the Finance Committee, Membership Committee and Policy Committee fed into the agenda of the full Board Meeting. The agenda included an update by the Financial Committee, the draft budget for 2016, discussed the upcoming membership survey (the idea was introduced during the General Assembly in Denmark), reviewed the action planning and discussed the planning and bid for the annual conference in 2016 and 2017. In an extraordinary board meeting in October 2015, the Board will make the final decision for the location of the General Assembly and Annual Conference in 2017, taking into account on the financial advice from the Finance Committee. The next physical board meeting is planned to take place in December 2015 in The Hague.