As 2016 comes towards an end, it is time for an update on how our exciting project on Silencing Citizens Through Censorship (SCC) is going. As of December 2016, more than 570 people have been directly reached through this project, with many more expected in 2017.  This project update will take you on a quick ride through the project description, the learning activities that were piloted in 2016, and the future plans for the SCC-project.

The project involves a transnational group of history and citizenship educators from EuroClio’s member Associations in France, Germany, Hungary, Italy, Macedonia, Poland, and Spain in the development and implementation of students-driven projects on censorship in Europe’s 20th century dictatorial and totalitarian regimes. The focus will be on the history of Franco’s Spain (1936 – 1975), Vichy France (1940 – 1945), Nazi Germany (1933-1945), Mussolini’s Italy (1922 – 1943), the post-1945 Hungarian ( – 1990) and Polish Republics (1944 – 1989) and the Republic of Macedonia as part of the Federal Republic of Yugoslavia under Tito (1945 – 1980). During the project the team members have developed engaging and thought-provoking resources on striking historical examples of censorship with their students through the collection, compilation and analysis of multi-perspective sources.

The busy and productive year of 2016

This team is quite unique. The way that they have come together and worked hard despite strict deadlines and busy professional and personal lives has been very impressive. I am also impressed with how well the team dynamics have played out, and how they all seem to get along exceptionally well whenever we held meetings and worked on materials. As a cherry on the top, the quality of the materials that have been developed has been great to witness, and I am especially happy with the level of trans-nationality of the sources in the materials that have been developed, and how eager the team members have been to pilot both their own and other team member’s materials. 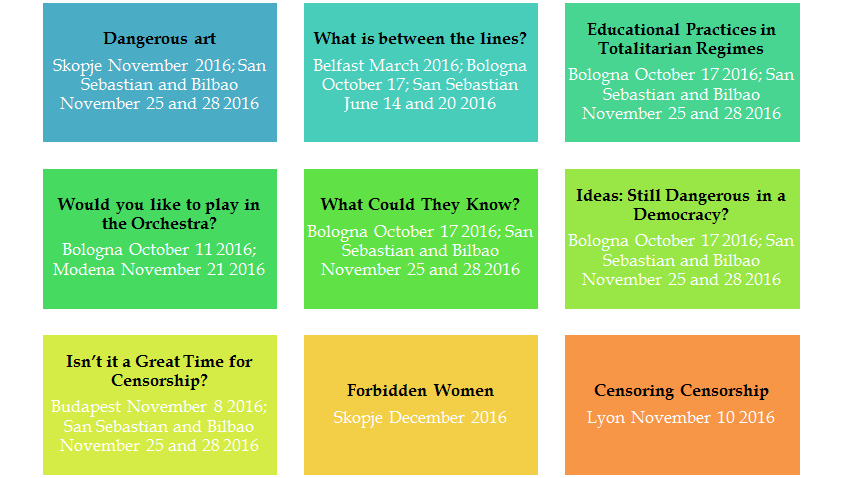 Above you can see an overview of what, when, and where the learning activities of the SCC project has been piloted this year. Reporting on these piloted events are available in the right column “latest news” on the project site.

In addition, two source collections (When Books Burn and State Security Knows Best) and two teaching strategies (Archives and Messages of the monumentals) are currently being developed in their final stages.

As the project moves into its final phase, the team members are working hard on incorporating the feedback received from piloting and reviewing the materials. In addition, more piloting is expected in the beginning of 2017, as the team finalizes and prepares for the full project launch and workshop at EuroClio’s annual conference in San Sebastian.

Keeping up with the developments

If you want to follow the developments of the Silencing Citizens Through Censorship project, you can keep up through our Facebook group and Facebook page where news articles are shared, by signing up for our newsletter, and frequently checking the project page below, where all news relating to the project are shared.

On December 3rd and 4th, Association of History Teachers of Macedonia – (ANIM) hosted the final development meeting of the Silencing Citizens through Censorship project. The final development meeting covered a lot of concentrated work and technical improvement of materials by the authors as well as reflection on the developments and next steps of the project. As a part of this convening, two of the authors Harri Beobide and Maria Laura Marescalchi lead a workshop based on the learning activity Forbidden Women which gives insight into how the role of how women were manipulated, censored, and their lives shaped during various authoritarian regimes in the 20th century.

The piloting workshop was a diverse and interactive one, with 22 participants mostly from Skopje, one from Gostivar, and three from Stip. In addition, the rest of the project team participated and moderated the discussion in groups. Furthermore, it proved to engage the participants who discussed, created, and presented their findings and answers to questions by creating an exhibition for the other groups to learn from as well.

In general, feedback from participants was positive; the activity was well-received, interactive, engaging, and offered multiple perspectives. A majority of the teachers said they found the material interesting enough to use it in their own teaching due to its relevance and gender focus, and were happy with the amount of different sources; both in type and in content. Some of the suggestions for improvement were to add more sources, to combine the activity with other activities such as visiting museums and adding more digital solutions to the activity.

The educational resources developed in this project will be embedded to the Historiana portal which will be relaunched during the upcoming EuroClio Annual Conference in Donostia-San Sebastian (2-7) April.

In the beginning of November 2016, the History Teachers’ Association of Macedonia (ANIM) successfully conducted a total of four workshops in two parallel session where the learning activities developed in the project Silencing Citizens through Censorship were piloted. The facilitators of the workshops, Mire Mladenovski and Bisera Srceva, presented the learning activities to an audience of 70 history teachers from all over Macedonia and gained essential feedback for future improvements of the activities.

Two learning activities were piloted: the already completed activity titled ‘Dangerous Art’ and ‘The Music and Arts: Then and Now’, an activity still in its development stages.

Taking into account challenges caused by working with 35 people at once, the teachers were divided into groups of around six people. When composing the group the organisers made sure of mixing participants from the Macedonian and the Albanian community, history teachers and history student teachers, as well as from different age groups. During the final part of the workshop sessions, the teachers convened around one table to discuss impressions, opinions and to collect general feedback.

The general response was that the teachers found the learning activities to be very engaging and interesting for the students. They particularly highlighted the fact that the learning activities contained sources like popular songs, comics, and poems was very positive, noting that students usually are more attentive when being presented with audio and visual sources by the teacher.

Although the learning activities were originally foreseen for high school students aging from 16 – 18 years, many of the teachers suggested that with small adaptations in methodology and approach, the activities could also be used for students in 9th (final) grade of primary schools.

On 26 May and 10 November 2016 Caroline Morel, from APHG France, successfully piloted two Learning Activities at Lycée Jean Perrin in Lyon, France: archival research as a teaching strategy and Censoring the Censor. Both learning activities were developed within the European project Silencing Citizens through Censorship. Learning from Europe’s 20th Century Dictatorial and Totalitarian Regimes.

On 26 May 12 students including an educator, took part in the two-hour workshop on censorship which consisted of a theoretical session complemented by an active part at the Municipal Archives of Lyon (Archives municipales de Lyon ). The theoretical part aimed at introducing the students to the concept of censorship, its mechanism and its application during the Vichy Regime in France from 1940-42. They also learned more on the fall of the 3rd Republic, the end of democratic freedoms and the armistice on 10 July 1940. For the active component of the lesson the students then had the opportunity to apply the knowledge they acquired before on censorship by studying various original documents at the archive.

At the same time a parallel workshop was held by Brice Rosier Laperrousaz at the Departmental and Metropolitan Archives of Rhône (Archives Départementales et Métropolitaines du Rhône).
The objective of the workshops were to offer students the possibility to become acquainted with historical research and terminology through the use of archival records but also to recognise parallels between developments in the past and present.

On the 10 November 38 students , including four teachers, a language assistant and one parent, took part in a pilot of the second learning activity Censoring the Censor, organised as a ‘History Coffee Break’. Students got tasked with studying and comparing sources from the Archives of Lyon and Rhône as well as from six other countries represented in the transnational EuroClio project. The activity aimed at encouraging students to think of creative solutions when being confronted with censorship and at understanding democratic values.
Last, EuroClio would like to express our thanks to Marie Maniga and Michel Gablin who are educator at the Archive and without whose help these pilots would not have been possible.

Since its founding in 1995, the NCH has aimed to provide a bridge between international human rights organizations campaigning for censored or persecuted historians (and others concerned with the past) and the global community of historians. As of now, the 21st Annual Report of the NCH, covering events and developments of 2014 and 2015, is available in a print-friendly version (pdf). You can find it here. It contains 121 pages of news about the domain where history and human rights intersect, especially about the censorship of history and the persecution of historians, archivists, and archaeologists around the globe, as reported by various human rights organizations and other sources.