Various EuroClio Delegations since 2008 have had the pleasure to be invited to meet and engage with the special context of historical reconciliation efforts in Northeast Asia; where China, South Korea and Japan share a troubled past in the 20th century. During these engagements, which included the conferences of the History NGO Forum for Peace in East Asia, it became clear that there is ample ground for strengthening cooperation across the Eurasian landmass. This has lead the Northeast Asian History Foundation to approve support for EuroClio to generate a more structural sharing of knowledge in the new funded project “History Education Beyond Borders. Mapping and Sharing European Experiences in Cross-Border History Teaching Resources”. This project is the first phase of a longer term cooperation that will aim to support and strengthen the possibilities to implement multi-perspectivity and critical thinking in the Northeast Asian context. The first meeting between selected experts and practitioners will take place at the margin of the 25th EuroClio Annual Conference in Marseille, which will take place on 21-26 April 2018. Later in the year the project will encompass a conference in Seoul.

The on-site learning activities continued to the travelling “Remembrance Square” exhibition by the Gogora Institute for Remembrance, Coexistence and Human Rights. “Remembrance Square” is a project that collects and exhibits witness accounts on what happened in the Basque Country in recent decades in order to build a shared and pluralistic memory. The activities finished with dinner at the well-known Petritegi Cider House. 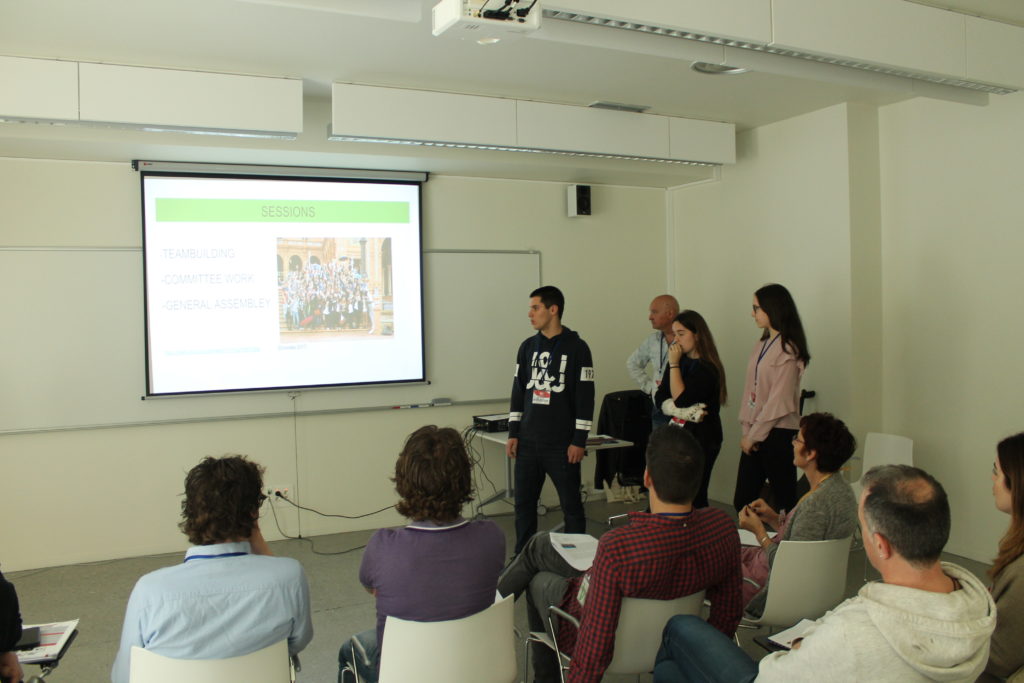 Five case presentations running in parallel by the students and teachers followed, touching on subjects such as the Wall of Gandia, the factory of the Salesians of Serrià, La Casita, the European Youth Parliament and ‘fighting in favour of equality’. The student-led sessions were a great success.

A concluding panel moderated by Ignacio Herrera brought insights from case presentations to the panel and open discussion among the conference participants. 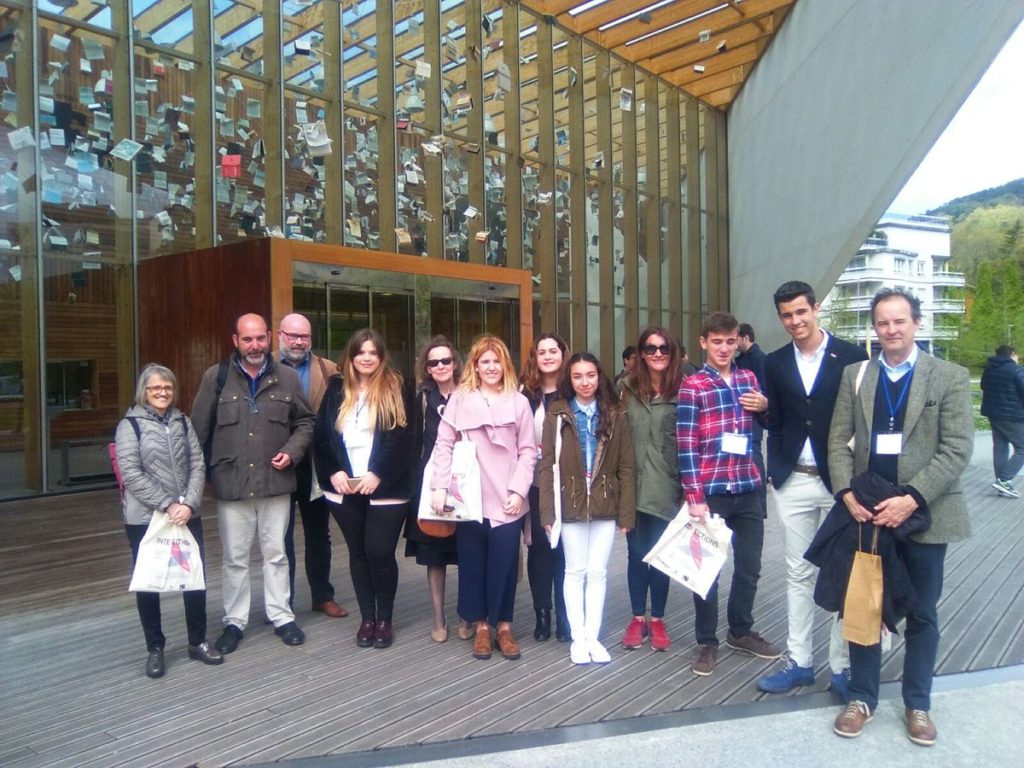 The first two full days of EuroClio’s 24th Annual Conference “Intersections: How can History Education Change Today?” in San Sebastian, saw two engaging panels take place. The first of which was aimed at addressing controversial histories that are still a challenge for Spain, and how these controversies are reflected in politics and history education today. Specifically, the panel focused on the cases of mass graves from the civil war; amnesty and the pact of forgetting; and the special relationship from Madrid to Galicia, the Basque Country and Catalonia. The panel included Giles Tremlett (fellow of the Cañada Blanch Institute, London School of Economics) José Álvarez Junco (contributor to El Pais and seminar co-leader of the Contemporary History of the Ortega y Gasset Research Institute) and Ander Delgado (Professor of the Teacher Training School of Bilbao, University of the Basque Country). 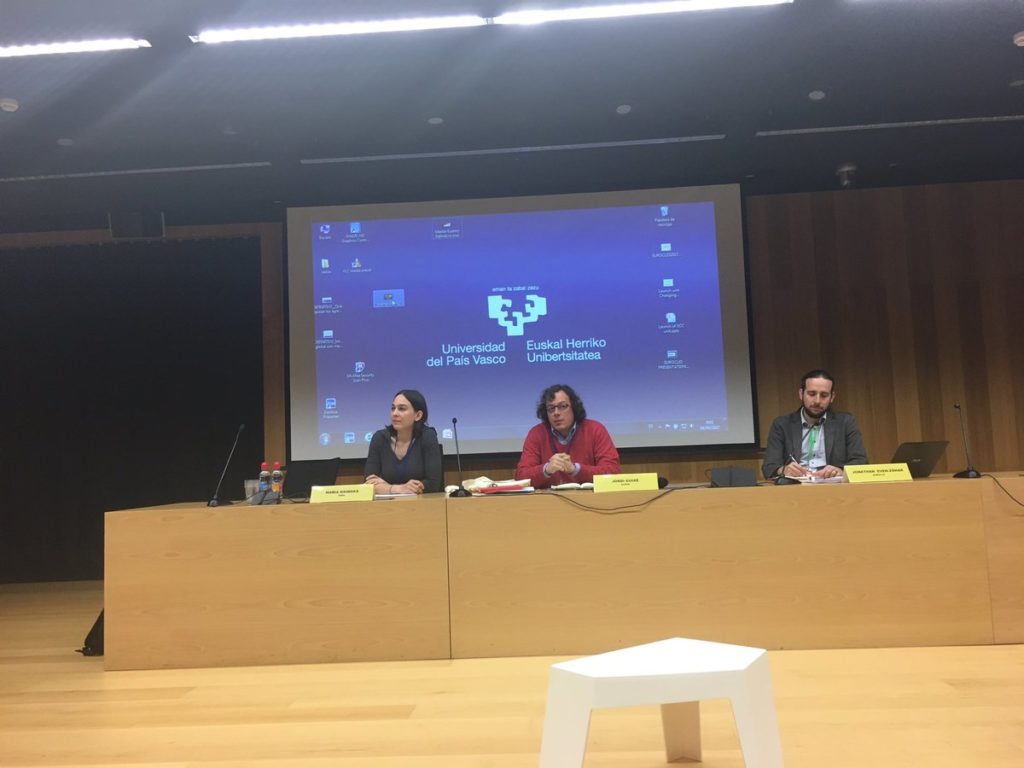 On Tuesday 4 April, a panel on “Society dealing with the past in History Education” through a focus on civil society initiatives took place. The panel featured Maria Naimska (Project manager of the European Network Remembrance and Solidarity, ENRS), Jordi Guixe (Founding Director of the European Observatory on Memories, EUROM), and Ignacio Hernaiz (Director of Organisation of Ibero-American for Education, Science and Culture, OEI). The panel gave their thoughts on how civil society initiatives can be included within teaching practices.

On Sunday 2 April, the 24th EuroClio Annual Conference and Professional Development Course “Intersections: How Can History Education Change Today?” was declared open by Director of EuroClio Jonathan Even-Zohar at the beautiful City Hall of Donostia-San Sebastian.

Words of welcome were given by the Mayor of the city, Eneko Goia, and the Councilor responsible for Culture, Basque Language and Education, Miren Azkarate, whilst the campaign to celebrate EuroClio’s 25th anniversary, “EuroClio25”, was launched. A performance from the Gero-Axular Dantza Taldea followed, thrilling the audience. The dance group was created in 2004 by some parents of Axular ikastola, with the intention of preserving Basque culture but also developing future trends. 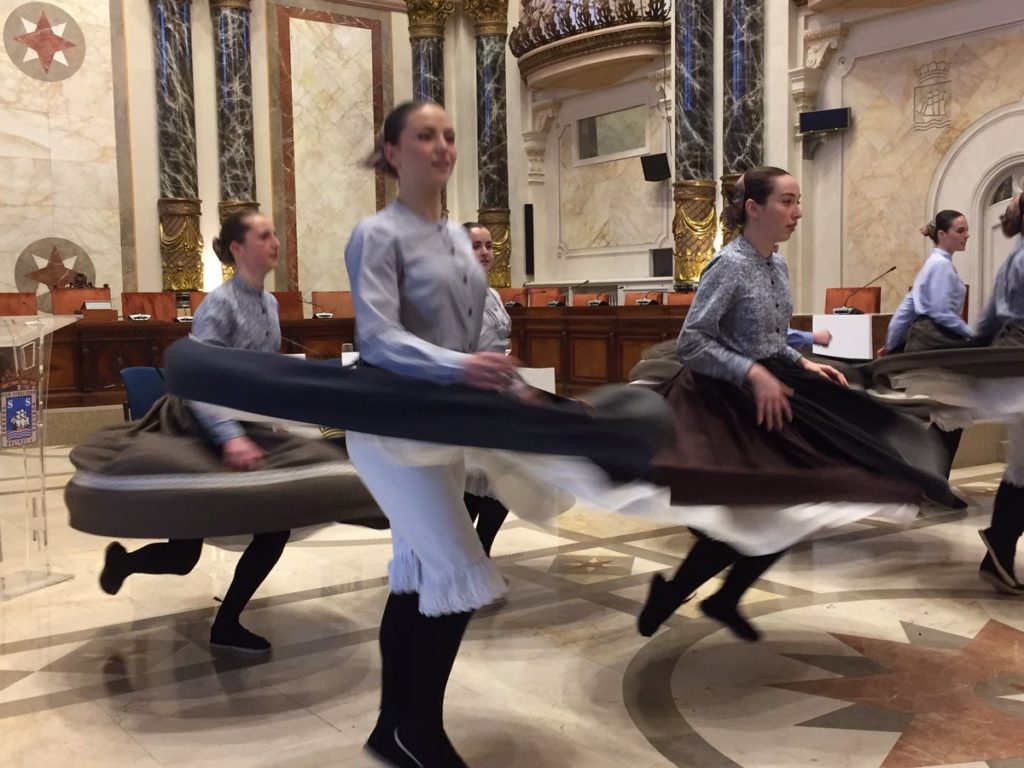 A further official welcoming ceremony took place on Monday 3 April, with contributions from the Vicerector of the host university EHU-UPV, the University of the Basque Country, and representatives from the joint local organiser associations: Vice President of the History and Geography Teachers Association of Spain, Luis Horrillo; and the President of Ikastolen Elkartea (Basque School Network), Koldo Tellitu.

President of EuroClio Lóa Steinunn Kristjánsdóttir raised strong arguments when highlighting the importance of lifelong learning of teachers during an interesting contribution, whilst Tatiana Milko from the Council of Europe posed questions about the position of History as a subject — for instance whether it can be merged with civic education or Human Rights studies. 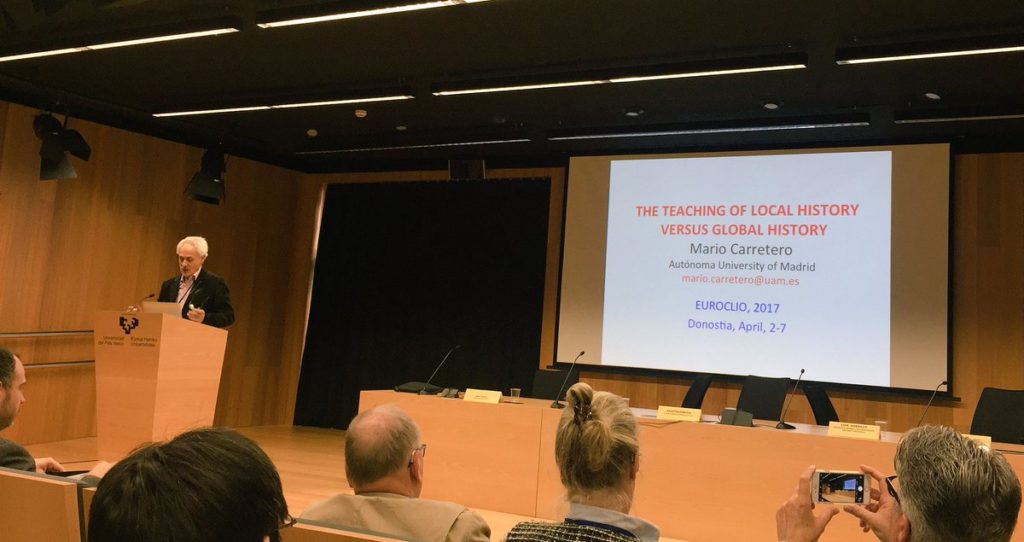 Mario Carretero, Professor of Psychology from the Autonoma University of Madrid, gave a fascinating key note speech on the topic of “Teaching of Local History (Collective Memory) Versus Global History”. Professor Carretero highlighted the role master narratives can play and the complex relationship between local and global issues.

Over the past week, from Monday 27 February to Thursday 2 March, the EuroClio team and the APHG (French Association of History and Geography Teachers) team met in Marseille to prepare the 25th EuroClio Annual Conference, which will be in the Mediterranean city between 21 and 28 April 2018, around the theme “Mediterranean, Dialogues”.

The aim of this preparatory week was to meet with the main partners and supporters of the Annual Conference and to agree with the APHG team on a final program.

On the first day, the EuroClio and APHG teams were hosted by a Conference Development Manager in the Congress Centre to speak about the logistics of the conference, such as excursion days, restaurants and hotels; this first meeting was very promising for the organization of the conference. In the evening, the group had the opportunity to attend a Mediterranean tasting and try different specialties to find a caterer for the Annual Conference; Mediterranean dialogues can also focus on food and traditions.
In the following days, the preparatory team had meetings with the two main partners of the Annual Conference: The History Museum of Marseille and the MUCEM (Museum of European and Mediterranean Civilizations), which will host the plenary conference, round tables and workshops.
It was an opportunity to introduce the Annual Conference program but also to exchange and agree on the content of the workshops, since the two museums will be involved in the events. After the meeting, the French and Dutch teams had access to the MUCEM. They visited the Gallery of the Mediterranean, which displays a variety of objects and works of art from Mediterranean civilizations, and the exhibition “After Babel, Translate”, which explains and covers from a historical perspective the challenges of translation in our globalized world.

EuroClio and APHG also found support in the City Hall of Marseille, and met with a Mayor Deputy responsible for integration. This meeting was again very promising because the City Hall showed its interest in the Annual Conference and suggested to host the Inaugural Day in the Pharo Palace, a spectacular venue constructed under Napoleon III.

Finally, the team visited a high school, Marseilleveyre, where one of the APHG members teaches History and Geography. This high school is situated next to the hills of Marseille and contains a lot of open-air spaces with big classes; so it would be perfect to host the last day of workshops. Besides, since it has Arabic sections, the APHG member suggested that Moroccan and Tunisian teachers could intervene in the workshops and round tables.

This first preparatory week in Marseille was very nice and productive for the EuroClio and APHG teams. It seems that the local actors are very motivated to host the 25th EuroClio Annual Conference and to introduce their Mediterranean city.

EuroClio – Inspiring History and Citizenship Educators is proud to present a unique opportunity for history education professionals to attend the 2017 EuroClio Annual Conference “Intersections: How Can History Education Change Today?” The conference will take place from 2-7 April in Donostia-San Sebastián, Spain.

At the 24th Annual Conference, the EuroClio project Decisions and Dilemmas will launch learning materials and have workshops specifically about how to teach the European Union. Through this project, EuroClio is able to offer maximum three scholarships for full participation in the 2017 Annual Conference. The scholarships cover travel from door-to-door, participation in the full conference and stay for 6 nights, for maximum three grantees.

Preference will be given to candidates who:

Eligible candidates are required to:

EuroClio project managers Aysel Gojayeva and Judith Geerling undertook successful visits to Madrid and Donostia-San Sebastián in preparation for the 24th EuroClio Annual Conference “Intersections: How Can History Education Change Today?” The visits have resulted in new local contacts and a partnerships with the Spanish Ministry of Education, Culture and Sports, the Community of Madrid. The partnerships will help EuroClio to further possibilities to engage more educators from all over Spain. Local partnerships are also important to enhance the conference programme with interactive activities and prominent speakers.

The conference will offer professional development opportunities enabling participants to learn more about historical, political and educational transitions in Spain and Europe. Participants will take part in active workshop sessions by educators from all over Europe, and engage in dialogue with local students to understand their views and engagement in dealing with the past and present. Moreover, participants will take an active role in enhancing the role of history education in changing today, by looking at civil society initiatives in dealing with past and present and local and global issues. The conference will balance the content focus with on-site visits, school visits and a diverse cultural programme.

Without revealing too many details, the local organizers, the Basque Network of Schools and the Spanish Association of History and Geography Teachers, are very excited to make the conference a memorable one, not only because of its rich content, but also by providing participants experience of local traditions, social activities and entertainment.

Registrations for the 24th EuroClio Annual Conference “Intersections: How Can History Education Change Today?” are still open, until 1 December 2016. Please visit euroclio.eu/sansebastian for more information! The call for hosting workshops and discussion groups will open soon. More information about the call will be available in the second half of November on the event page.

In the framework of migration, idenity and placelessness, the “Heritages of Migration: Moving Stories, Objects and Home” conference will take place 6-10 April in Buenos Aires, Argentina.

The conference will be held at the National Museum of Immigration, and aims to tackle issues that touch upon various aspects of migration – with the migrants themselves at the center – and meanings. The conference asks the following questions,

Click the link below to read more about the call for papers.

The conference will address the key question “How can history change today” in the context of our dynamic and challenging world. Looking trough the theme Local vs. Global it wishes to go beyond the most evident communities of all, the nation, and explore the role of history in the shaping of local and global communities and identities. Another theme, Past vs. Present will be discussed in the relation to history education and current affairs. With the ongoing series of crises, embedded in global developments, what is the role and responsibility of history, heritage and citizenship educators in bridging all these complex current affairs with history?

Specific topics feeding into workshops and dialogues will include European cooperation in historical context and independence in an interdependent world. The conference will entail a key note speech by a prominent historian, panel discussions, dialogue tables, workshops, on-site visits, visit to schools and many more.

To learn more and to see the preliminary programme, download the conference brochure and visit the event page below.