On February 17th Bridget Martin, History Teacher at the International School of Paris, continued the Historiana webinar series, an occasion to dive into the platform’s teaching and learning tools and to discuss historical critical thinking skills. By using Historiana’s e-builder, Bridget was able to create a valid and purposeful eActivity on contributions to WWI. This article will focus on the reflections that Bridget delivered and you will get inspiration on how to use Historiana in your classroom. Watch the recording of the webinar here.

<b> </b>
Historiana is an online portal developed by EuroClio, Webtic and UseMedia with Europeana for and with history and citizenship educators from Europe and beyond. On Historiana you can find ready to use learning activities, multiperspective historical content and digital tools that are all free to use, adapt and share.

Bridget started off with a challenging, imaginative request: she asked her audience to picture a soldier serving for France or Britain in the First World War and to build a mental picture of what this soldier looked like as detailed as possible - what is he wearing? What kind of vehicle does he have? Is he holding a weapon?

The answers she got agreed on a stereotyped image of a young, white soldier wearing a dark green, muddy uniform and boots holding a rifle or a gun. She then dismantled any cliché by showing pictures of soldiers on camels, wearing turbans or conical hats.

“We often forget the contributions peoples have made over time and I think it’s important for us to questions our own assumptions and be aware of our own biases when we imagine these kinds of events.”  Bridget Martin

Bridget explained that teaching about colonial contributions to WWI represents an attempt to move away from a Eurocentric view of a particular period of history which often becomes massively focussed on the Western front. Colonial contributions have been historically significant, as over 4 million of people from the British, French and German colonies directly contributed. She argued that history education would benefit from a transnational and holistic approach that incorporates broader perspectives into teaching. She gave the example of the popular belief that the first shots fired were British, while in truth the very first shots were fired in colonial territories. 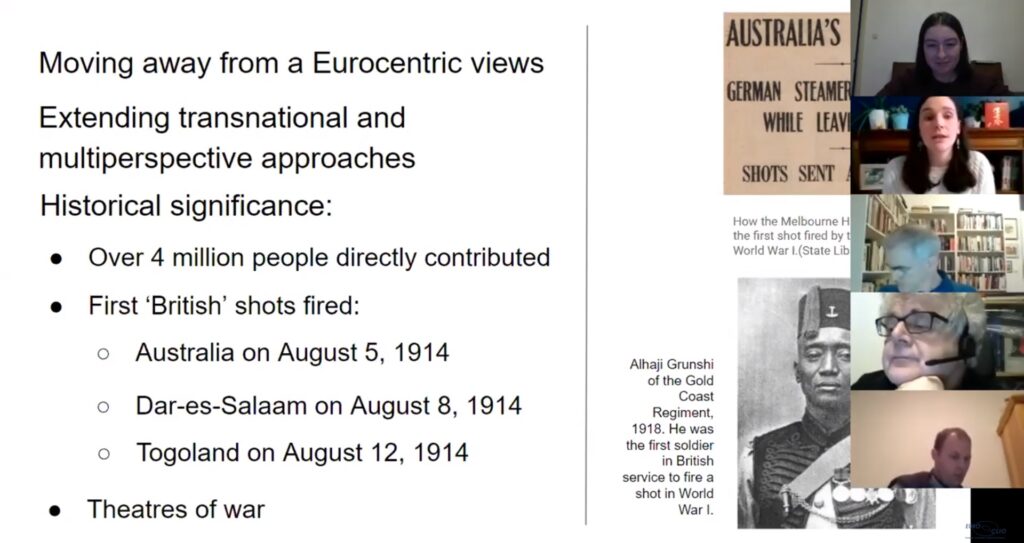 (Click on the image to watch) 07:37 - 13:12 In this segment, Bridget Martin explains why it is important to teach about colonial contributions.

Bridget made us aware of some crucial points we should consider when teaching about colonial contributions to WWI. If you are teaching this topic, it might be good to know that there is an entire Source Collection on Colonial Contributions to WWI which is freely available and ready to use on Historiana.

Bridget highlighted the racial hierarchies and stereotypes employed by the colonial powers when assigning combatant or non-combatant roles. In fact, races that were considered inferior were given labouring non-combatant roles, and even soldiers were not equally treated. There were also specific rules about where or where not they might be allowed to be sent. Troops from the colonies were stationed in the middle east or in the African theatres of war rather than in the European theater, as the European side was concerned that if peoples from the colonies became too used to using violence against Europeans, they could have become a threat.

The manner in which colonial peoples were recruited into the war effort varied: sometimes it was voluntary, but there was also a huge amount of conscription - most often colonies were deceitfully promised greater political freedom. 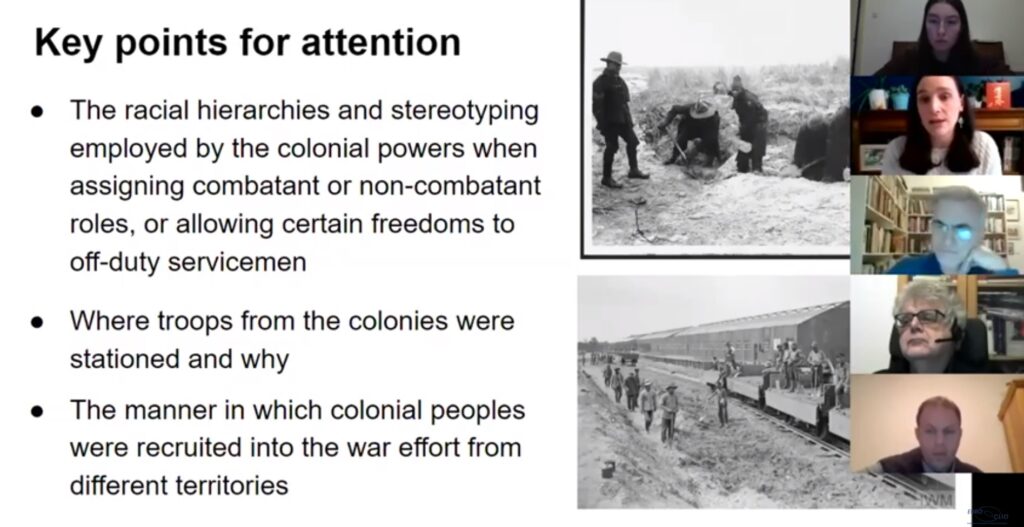 (Click on the image to watch) 13:13 - 22:36 Bridget points out what is important to keep in mind when discussing colonial contributions to WWI.

“All of those colonized groups did not have the same experience and there were huge amounts of variables which would determine the nature of their experience […]. When we are taking perspectives, we should also appreciate that there are a diversity of perspectives and there’s not just one colonial view of the war or colonial experience of the war.” Bridget Martin

Reflecting on why colonial contributions are seldom mentioned when discussing WWI and on the reasons why they were involved in the war in the first place provides students (but also teachers) with food for thought. Trying to consider how colonial peoples’ experience of the war differed to those of Europeans (and how different colonial groups experienced the war differently) is the first step to historical perspective-taking.

What does it mean teaching Historical Perspective-Taking (HPT)?

Drawing on Seixas definition, Bridget described it as the attempt of understanding the minds of people who lived in worlds so vastly different from ours. It is indeed very hard not to see the world through the lenses we wear today - and it represents one of the main challenges teachers encounter when teaching HPT.

Tim Huijgen, Professor at University of Groningen, broke down historical perspective-taking into three key elements: historical contextualization, historical empathy as “identifying with people in the past based on historical knowledge to explain their action” (Huijgen, 2014), and avoiding presentism by providing students with sufficient primary source material and evidence in order to let them draw valid conclusions. 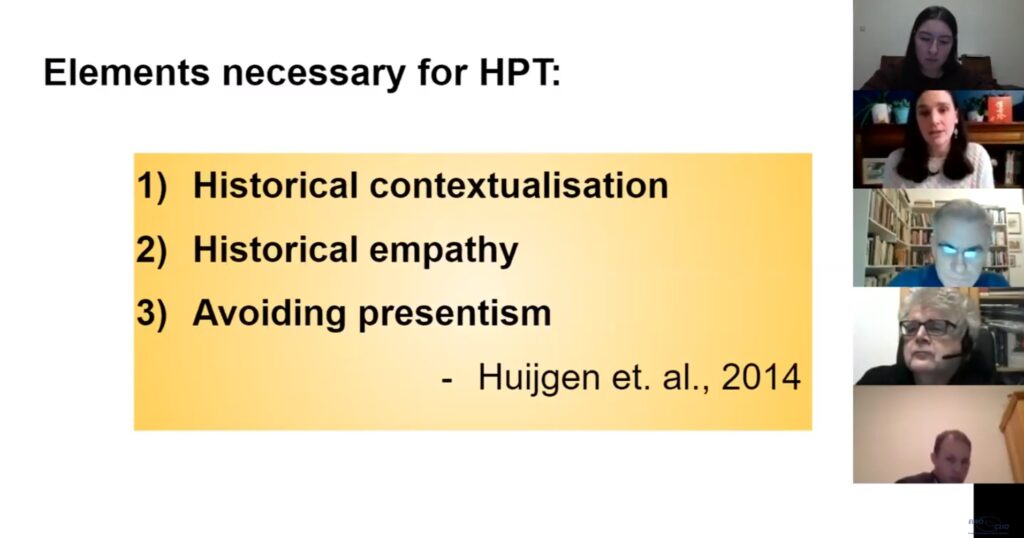 How to implement all of this into an eLearning Activity?

Bridget Martin concluded the webinar by explaining how she combined her insights into a meaningful eLearning Activity on Historiana called “Different Experiences of WWI”. This specific activity requires roughly two hours, but the platform allows you to make all the changes you need, shorten it and adapt it in a way that makes sense for your students.

Bridget structured the activity in a way that students can elaborate their thoughts on colonial contributions, which initially might be shaped by a retrospective view of the past times. She provides them with primary sources and also lets them do some active research to then discuss their findings in small groups, making sure that they justify their opinion using evidence.

On Historiana you can very easily adjust ready-to-use learning activities or create your own activity - and let the students engage with primary sources and both audio and visual material!

(Click on the image to watch) 31:04 - 42:25 Bridget walks us through the activity she developed on Historiana.

Want to learn more about teaching about contributions to WWI and historical perspective-taking? Watch the full webinar here!

This article is part of a webinar series, in which teacher educators who are experienced in using Historiana show examples of the eLearning Activities that they created, while also diving into a specific topic and discussing a critical thinking skill to teach students.

On December 9th, EuroClio ambassador Helen Snelson kicked off the webinar series: she talked about using sources as evidence and illustrated the eActivity on post-war Europe that she was able to create on Historiana. Watch the full event or read the article to know more.

These are the upcoming events: