On the 6th of October 2021 Annemarie Cottaar, Dutch historian, passed away. Annemarie lived to be only 66 years old. She contributed significantly to the history of different groups of migrants in the Netherlands.

Annemarie was born in Amsterdam in 1955 and grew up in The Hague. She continued her secondary education at the evening Athenaeum (preparatory academic education). There she met Wim Willems, who became her partner for life and with whom she would write several papers and books. She studied History at Leiden University. She told me they wrote their history masters’ theses already together - really romantic in my eyes - about the so called Indische Nederlanders (East-Indian-Dutch immigrants who came to The Netherlands during and after the Indonesian National Revolution)

Our paths crossed. The path of the migration historian Annemarie Cottaar and the history educators of EuroClio, in particular that of Steven Stegers (at the time Senior Manager, nowadays Executive Director) and of myself (member since 1991 and currently EuroClio Ambassador). Our paths crossed at the start of a new EuroClio initiative: An international education programme called Historiana - Your Portal to the Past. With Historiana, EuroClio was developing an online educational tool that offers access to trans-border, comparative approaches to history and heritage, as an alternative to a printed history of Europe and beyond.

We found each other at the end of January 2010 in a snow-and-ice-covered suburb of Berlin,  to deliberate the how and what of the first case studies for EuroClio’s brand-new digital component 'Historiana', conceived by Steven Stegers. The first Historiana project should be “Discovering Diversity”. And the theme became “People on the Move: An integrative approach towards the history of migration”. It was based on the experiences of migrants, with data collected and retrieved following a fixed pattern of questions. This framework with its standard set of key questions would allow comparisons between the different modules. This approach was right up Annemarie’s alley. Based on thorough archival research and in-depth interviews she had already published several accessible books on groups of newcomers in the Netherlands.  She had knowledge of the collections of the Centre for the History of Migrants (Het Centrum voor de Geschiedenis van Migranten). And at Leiden University, she had developed the Spoorzoekers (Track Seekers) Project. This tracker method trains children of migrants to collect and describe photos and documents from their own families, in order to add them to the collective heritage. In this way a selection of these were brought together in an online database, the Historisch Beeldarchief Migranten (Historical Image Archive of Migrants), forming a unique source for Dutch migration history. Annemarie pointed to the power of images for research. At last Steven found also the newly published website about ‘Five centuries of Migration’ hosted by the International Institute of Social History (IISH). The driving power behind both initiatives was Annemarie Cottaar. 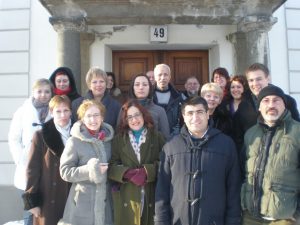 Back to Berlin. In rooms of the Freie Universität, the first ideas of Professor Bob Stradling from Edinburgh were developed in consultation with the international team of developers gathered. We brainstormed which topics to choose and how to approach them. We thought of case studies. Every developer thought aloud: which group of migrants s/he would like and be able to tackle and also what period in the history of his/her country. Annemarie and I worked cordially together in our different roles of expertise. We looked for successful migrants on their way to integration in the new homeland. Annemarie knew of Roma caravan dwellers, Italian terrazzo workers, Chinese restaurant owners, Moroccan and Turkish guest workers. We rather quickly decided to base our case study on her book about 'Sisters from Suriname' (2003).

Dutch Prime Minister Drees' call shortly after World War II was powerful and beautiful: ”Please, nurses of Suriname, come to the Netherlands. We need you and you have an advantage: you already speak the language.” Annemarie had studied how the group of Surinamese young women were received in Dutch society. In live interviews they spoke about how they were treated and felt recognised in the hospitals by educators and patients, how far they integrated in society. Annemarie had followed the lives of several of them in the Netherlands and during the commemoration service for Annemarie on 14 October I realised my seat was on the same row as one of the former nurses.

With the pattern of basic questions Annemarie always managed to find the right sources to get answers to the key issues at hand. At the time Steven noticed that “we were the only couple”, the other members of the Historiana Editing Team operated more separately. He remembered the harmony of our collaboration. We both enjoyed the work a lot. I still remember how we proudly presented in The Hague the PowerPoint “Nurses from Suriname”, which she had made from her archive with the material discussed. And she told how the book was followed by a well-visited exhibition in both the Netherlands and in Paramaribo.

We continued to work on interesting tasks based on sources. Six modules were developed by the team during capacity building and hands-on workshops. In January 2011 the last of these workshops was organised in Istanbul:  the 2nd Historiana Capacity Building Seminar together with a training seminar for Turkish history educators. The last editing meeting took place in London. The project finalised in 2011, produced six historical online case studies on groups of people that were on the move.

In Istanbul, Annemarie and I stayed two days longer. There it happened that Annemarie said to me, on 24th January 2011: “I got so tired of walking, yesterday, l will visit a doctor back home.” It turned out to be a pleura cancer; she would live another ten years. We stayed friends in a less intensive way. Her partner, Wim, sent exactly 50 “progress messages” of Annemarie’s well-being and less-well-being till the end of this summer...

We remember Annemarie as a refreshing friend, a groundbreaking and original thinker; when dealing with major social themes she never lost sight of the human dimension. She strengthened Euroclio's mission and attitude how to deal with the past. What struck me in her character was her strength and self-confidence, her unfrozen way of knowing what she wants, her frankness, her straight opinion. We matched; we kept our friendship alive during her ten years of struggle for live. I miss a dear friend, she stays in my heart.

The EuroClio community will also miss a dear friend and we will not forget her.