At the moment, I combine teaching with pursuing a PhD at the Institute of Education at University College London which, according to its slogans, encourages innovative and disruptive thinking. One of the ideas that has created quite some attention is the formulation of Powerful Knowledge (PK) by Professor Michael Young. Since the beginning of this century, Professor Young promotes the idea of a re-focus on knowledge in the curriculum and moving away from a curriculum based on 21st century skills or other competencies. Initially, this sounded like a reactionary attitude to me: while there is some recognition for multiple ways of knowing, there are also the conservative voices calling to bring ‘real’ knowledge back into the curriculum. However, the more I started to read about PK and its essential complementary ideas, the more I realized that theoretical knowledge can also be empowering. Encouraging ways of thinking that are specific for a certain community of inquirers will allow for a deeper understanding of reality. For now, this idea is mostly put into practice by geography educators at UCL, however the principles of PK are also very much applicable to history. In this blog post, I would like to explain the essential characteristics of the idea, along with important criticism focussing on social justice. Lastly, I would like to suggest an implementation in history education.

A curriculum on the basis of PK perceives subjects as specific disciplines with their own procedures and protocols to understand and examine the world. In an article in 2010, Young and Muller elaborated on three possible futures of education: 1) the continuation of the elite system as it exists today; 2) the end of disciplinary knowledge which is replaced with generic outcomes hereby - unintentionally - educating students solely for employability, while also deprofessionalizing teachers and de-specializing research; 3) emphasizing the role of specific knowledge communities in acquiring and producing knowledge, whereby the aim is to supplement the everyday experience with theoretical knowledge. Young and Muller predicted that future 2 will remain most popular because of the (hidden) neoliberal tendencies of this educational system, while future 3 has, according to Young and Muller, more potential to confront contemporary challenges such as the growing inequality, polarization, and misinformation.

PK is not about dominating, but rather empowering the learner. According to Young, there are two types of power: the kind that wants to dominate, thus exercising power over something or someone; and the emancipatory kind, namely the power to do something or to think something. What makes PK emancipatory, according to Young, is that it provides students with the ability to critique society as it exists.

Biesta is another proponent of bringing knowledge back into the curriculum, as a way of indicating to students what might be worthwhile paying attention to. Biesta suggested that emancipatory teaching would let students “figure out what they do with what they may encounter there. The judgement, and the burden of the judgement is, in other words, on them [the students]”. Young claims that all students should have access to emancipatory knowledge as it allows for generalizations, imaging the yet unthinkable, conceptual understanding, and embedment within specialized inquiring communities. In contrast, future 2 education will place the focus on everyday experience without complementing it with theoretical knowledge that allows for a more complex understanding. Hence, Young claims, future 2 will only make the achievement gap wider between students, as the theoretical knowledge can act as an equalizer. Young exemplified the difference between everyday knowledge and PK on the basis of geography: everyday knowledge is your knowledge about how the public transport works or where the stores are located, whereas PK is an understanding of how cities are organized and how they might change.

The idea of PK is based on a social realist perception of knowledge, which can be dismissive of ways of knowing outside western perceptions of ‘knowledge’. A social realist perception of knowledge means that the acquisition and production of information involves systematic concepts and methods within communities of enquirers who search for truth within their distinctive disciplines. Hence, it can be said that a critical attitude towards PK is necessary to understand that knowledge is never neutral and always highly political.

Therefore constructive criticism of PK has complemented the theory and encouraged the integration of social justice. In 2018, Wrigely expressed his worry that social structures influence knowledge formation and distribution, inevitably creating silences due to dominance of certain voices. Hence, Wrigely argued for the incorporation of a theory of knowledge called critical realism, which would acknowledge that the curriculum is political and never neutral. Students should therefore have the ability to evaluate any knowledge claims because they understand that social structures and conventions play a role in the formation and distribution of this knowledge. Thus, Wrigely suggested that PK should incorporate a critical element by supplementing the everyday experience with a focus on “underlying forces which are at work, that these forces might not always be active or visible, that everyday experience is not always the best guide to understanding the structures that impact on our lives..” (p.12). Therefore, Wrigely suggested “Productive Pedagogies” to complement conceptual thinking with students’ everyday life experience. So PK in a critical realist interpretation would still mean a focus on key concepts and challenging ideas, but would account for the social structures in society that allow for some knowledge to emerge and be distributed more widely.

Another useful addition to the idea of PK is the concept of Powerful Pedagogies, which encourages enquiry as a way of learning. Roberts wrote in her response to PK that everyday experience is a necessary element in teaching in order for students to make a connection between the theoretical concepts and their own lives. According to Roberts, the everyday experience of students is not just their location but also the media in which they interact or the circles in which students find themselves.  As a result, Roberts argues that subjects, like geography, have powerful ways of understanding this world: ”through the kinds of questions it asks and the ways in which it investigates them” (p.201). Roberts furthermore stresses the political element of knowledge, hence there should always be a reckoning of its origin and context in which it was created. Roberts emphasizes the importance of how the teaching takes place, thus the method of instruction which truly allows for knowledge to become powerful or not. According to Roberts, PK can in other words only become emancipatory when Powerful Pedagogies are used. Roberts summarises Powerful Pedagogies with three characteristics: 1) Enquiry-based; 2) Dialectical Teaching; 3) Critical. Thus, PK alone will not provide students with a complex understanding of the world it needs to co-exist with powerful ways of teaching.

The powerful element of knowledge is not only in the hands of the teacher. The students themselves need to feel agency in order to act upon the newly acquired insights. Alderson enlists in her response to PK four necessary conditions for knowledge to become truly powerful: 1) The Known; 2) The Knowers; 3) The Social and Cultural Context; 4) The Application. The Known in the case of PK refers to knowledge that is constantly changing and emerging through research and creativity, aiming to move towards reliable truth. According to Alderson, this knowledge can never be powerful if there is no human agency involved (the knowers), thus for knowledge to be powerful there should be an active and creative dialogue between the knowers and the known. This power of this dialogue depends on social and cultural contexts, as this learning is not happening in a vacuum but influenced by real life challenges, which needs to be considered for PK to truly be emancipatory. Lastly, the application of the known by the knowers in particular social and cultural context will determine whether it can influence society. Thus knowledge might claim to promote social justice but this will only be the case if the application of the knowledge is done in such a way.

To summarize, PK as originally suggested by Young could have indeed promoted a reactionary response to the increasing liberation of marginalized voices, however when PK is informed by a critical realist perception of knowledge this can be averted. Thus, PK has the potential to act emancipatory when it accounts for the political nature of knowledge and thus reveals structures and conventions in society that allow for dominant voices to be (over)heard while marginalized communities are silenced. Furthermore, knowledge can only become powerful when teaching is emancipatory through a focus on enquiry, dialectical teaching, and a critical understanding of the subject. And lastly, knowledge is only powerful when its application indeed promotes social justice.

As of now, most of the debate and application of PK took place in the discipline of geography. The critical application of PK can however also suit a subject such as history. In early 2021 a book will be released (and edited by Arthur Chapman) that applies the idea of PK to the subject of history. In another contribution from 2018, Counsell mentioned the potential of PK for the subject history in a blog post. For this sake, Counsell uses substantive knowledge –  content as facts, e.g. Treaty of Brest-Litovsk, Fall of the Berlin Wall – and disciplinary knowledge – evidence, causality –, as both a part of historical knowledge. Counsell suggests that this division is a helpful tool when engaging with PK in history education: it is impossible to teach students all the substantive knowledge, therefore discipline knowledge is required.

To make this a bit more clear, I will try to give an example of PK in history on the basis of the topic women’s suffrage movement in the Netherlands. In 1919, active women’s suffrage was achieved when a bill was approved by the House of Representatives, after more than fifty years of protest. However, it was only in 1937 that women older than 25 years in the Dutch colonies received passive suffrage, which became active suffrage in 1948 after more than a decade of protest movements. 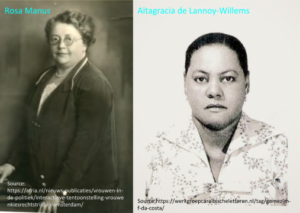 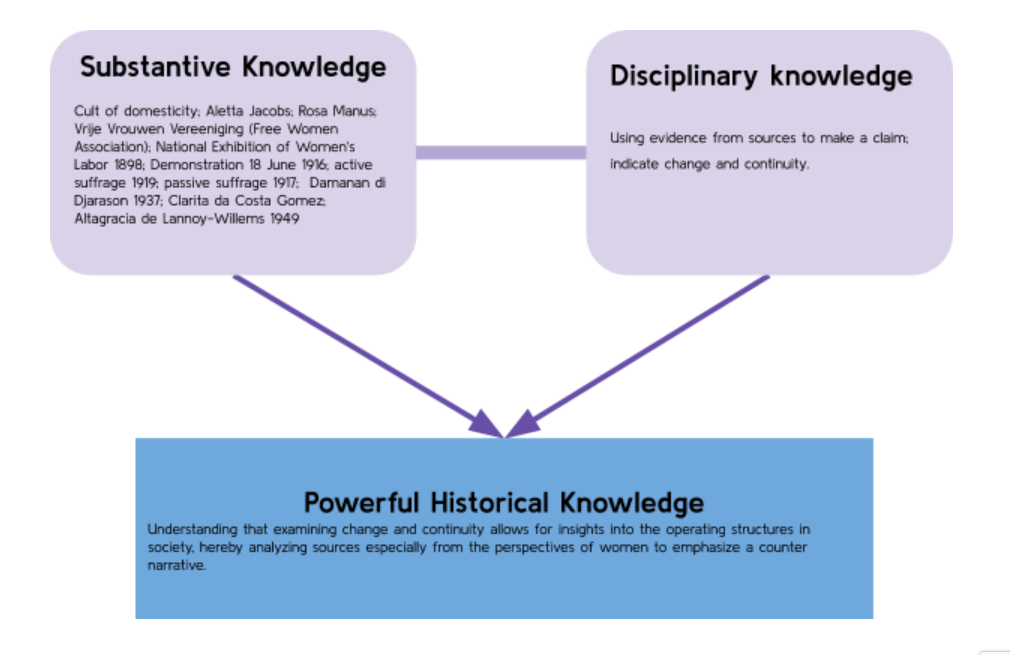 In this case, the PK might be that students are able to assess to what extent the women suffrage bill of 1919 was a change or continuation for women in public life. For this, students use their substantive knowledge about the historical context of the 19th century and the ways in which women were protesting. Students need disciplinary knowledge to be able to critically analyze sources and ‘read against the grain’ when analyzing primary sources to indicate whether women’s role in the public indeed changed or how certain systems continued, especially for women in the colonies. The emancipatory element of this knowledge could be that students understand the historical relationship between gender inequality now and then, while being able to actively search for marginalized voices in public debates. This knowledge can then be used in a very practical way by having students write a commentary on current representations of women in politics, or set up a campaign to encourage political participation of everyone.

As we currently live in a pandemic during which universities, again, make most cuts on their social science and humanities departments, it would be good if we as educators can be vocal advocates for the importance of our subjects. The idea of PK shows the importance of having different knowledge disciplines, as each discipline brings with it their own ways of knowing and viewing the world. Hence, the subject history can emancipate students by allowing them to understand the present through knowledge of the past, utilizing the historical method for research, and having a healthy sense of suspicion towards any source. It would be great if history educators can be more vocal and explicit about the power that historical knowledge provides to students, to avert authoritarian tendencies in our multicultural democractic nations in Europe. This blog post is merely intended to start a conversation among history educators about the powerful knowledge in our subject and how we can better advocate for our subject and discipline.

Information about Women Suffrage in the Netherlands: