The Jewish presence in Europe goes back over 2,500 years, and this can be seen through a rich cultural and historical legacy, stretching from western through eastern Europe. At the beginning of September, EuroClio had the opportunity to speak with Michael Mail, the founder and Chief Executive of the Foundation for Jewish Heritage to discuss issues related to the topics of Jewish Heritage and education concerning Jewish history in Europe.

Zaira: What inspired the creation of your Foundation?

Michael: The Foundation for Jewish Heritage was created in London in 2015. The main reason for the establishment of the organisation was due to the fact that there were no institutions working solely on preserving Jewish heritage on an international scope. Jewish heritage today faces special challenges that can be associated with two major factors — the Holocaust and Jewish migration. The Holocaust not only led to the tragic death of 6 million Jews, but it also meant that many buildings lost their community of users. Jewish migration also played a part as buildings formerly attached to Jewish cultural life and activities became orphaned heritage. 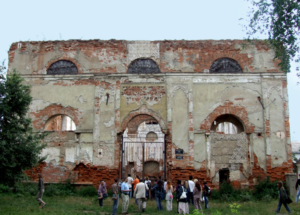 A stark statistic is that, at the beginning of the 20th century, 9 out of 10 Jewish people lived in Europe, today it is 1 out of 10. There are various reasons for this pattern of migration. One is that in the 1880s, which witnessed a resurgence of antisemitism predominantly in Eastern Europe, thousands of Jewish families chose to migrate to the West. Many went to America, which was seen as ‘the land of freedom and opportunity’. In central and eastern Europe, Jewish heritage was especially affected by policies that were effectively “cultural genocide”. During the communist era, places connected to Jewish religious life were closed down by the authorities. Under this form of repression, combined with the suppression of religious life and antisemitism, Jewish cultural heritage faced huge challenges.

The story of migration also applies to Jewish heritage in Western Europe. In England for instance, Jewish families settled in London’s East End with other migrant communities. However, as time went by, they moved to the suburbs, leaving behind the synagogues in their former neighbourhoods.

Zaira: How do you select and prioritise the heritage buildings you work on?

Michael: The Foundation for Jewish Heritage decided to prioritise synagogues as these were the most iconic buildings pertaining to Jewish communal life, and typically the most artistically and architecturally rich buildings. Moreover, synagogues became important representations of Jewish participation within European society as, during the period of emancipation in the 19th century, Jews were accepted as citizens of Europe.

With this focus, the Foundation mapped out all the historic synagogues existing in Europe today. They found that less than a quarter had survived the Second World War. In 1939, there were around 17,000 synagogues in Europe. Today there are about 3,300 sites. The Foundation also categorised the synagogues according to significance and condition, which allowed them to identify the most important buildings and those most in danger. 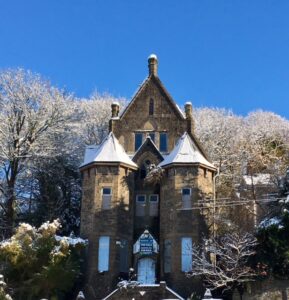 Currently, the organisation is profiling 16 buildings. One of these projects is in the town of Merthyr Tydfil in Wales. Merthyr Tydfil was an industrial powerhouse in the 19th century and the largest town in Wales, with a big Jewish presence starting in the 1830s. The remarkable gothic synagogue was built in the 1870s.  However, with the industrial decline in the latter part of the 20th century, the Jewish community moved away, and the synagogue was closed in 1983. It has been empty since 2006 and was listed as being at risk. The Foundation bought the building in 2019 in order to turn it into a Heritage Centre. By saving these vulnerable synagogues, they have the ability to become powerful sites of education regarding Jewish life and contribution, and this is the driving idea behind our mission.

Zaira: Is it possible to draw a parallel between the poor state of Jewish heritage and the place that Jewish history has in history books?

Michael: The place that Jewish history has in history books may very well reflect attitudes within society. If we take the example of Belarus, the capital Minsk, was the only capital city in the world that once had a Jewish majority. The Jewish contribution to the city — and country — over the centuries was huge, and the synagogues date back to the medieval period. Nevertheless, Jewish history is a neglected topic in the country. If you visit local museums you will find that there is little mention about the Jews and even less about the Holocaust, in fact, the memorials to the Holocaust use the generic term ‘victims of fascism’. This is a feature of the Soviet-era, following the Second World War when such memorials would consciously not mention that the victims were Jews. Belarus is an extreme case of “absent history”. 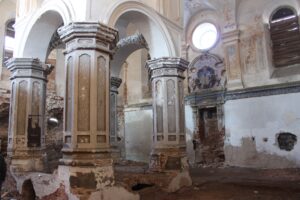 The Foundation has taken on an important project in Belarus — the beautiful Great Synagogue in the town of Slonim which was built in the 1640s. In 1939, out of 25,000 inhabitants, 17,000 were Jews. During the war, they were marched out of the town by the Nazis and their collaborators and executed in the most barbaric fashion. Only 200 survived. The Holocaust is probably the most tragic event in Slonim’s history and we like to think that, in saving the Great Synagogue which represents the last physical remnant of this lost community, in recognising what happened and presenting it, in educating and engaging people rather than ignoring it, we might also bring a level of healing to a place like Slonim.

Zaira: How can these places of Jewish Heritage contribute to education?

Michael: All the Foundation’s Trustees agree that saving Jewish heritage is a means to an end, and that end is education. The main goal is to use these historic synagogues as centres of education. The Foundation aims to create educational projects working with the towns, institutions, and schools  – local ownership and participation are crucial to success. We want to adapt Jewish heritage sites for a new purpose which recognises its original function while bringing value and serving the local community of today. We are taking buildings that had become meaningless and making them meaningful again.

The educational component in the Foundation's mission has an important contemporary relevance. Jewish history contains a profound message for society about what prejudice unchecked by law, morals and ethics can lead to. Furthermore, this history addresses issues of pluralism and diversity, as well as the value of intercultural dialogue and cultural exchange in society. These concepts help to make history relatable and understandable to pupils. It can play an important role in contemporary education, hopefully building understanding and empathy and combatting ignorance and prejudice.

Zaira: How do you deal with issues such as Multiperspectivity and Competing Narratives?

Michael: The Foundation is interested in using oral testimonies. Oral history, being personal and intimate, can allow for a deeper connection with the past. The Foundation is intent on using oral histories on Jewish life from both the Jewish and non-Jewish perspectives. When it comes to competing narratives, there can be various ways the same event is understood. Therefore, a constructive solution lies in acknowledging sensitive areas in history by addressing them and presenting the different narratives and how these arise. We know history is complex and often controversial.

Zaira: What are some of the dreams and plans of the Foundation? 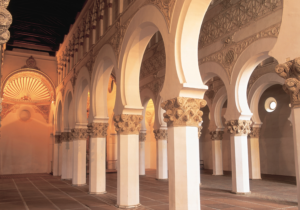 Michael: The core of the Foundation’s work remains…saving Jewish heritage at risk. Certainly, there are multiple projects that we are and could consider, but this is a question of resources and time. For example, the Foundation is keen to explore how we can use digital materials to provide educational resources. One idea connects the mapping of the historic synagogues in Europe to a second phase which would be to collect narratives associated with each building, to create a space where people can share pictures, documentation, or stories of their families and ancestors. In essence, we would establish a repository of memories connected to the towns and synagogues in question. This would allow people to visit the synagogues virtually, and have access to resources such as photographs, texts, and oral histories without having to travel. People would be able to connect with the story of the past Jewish life…and get access to various types of information.

The Foundation wants to transmit the message that “Jewish heritage is shared heritage”, — it is a Jewish, a national and a European heritage. Another key message is that Jewish history is far more than simply addressing the Holocaust. This is a civilisation that in Europe stretches back 2,500 years with a unique, dramatic and remarkable history.