Across Europe, history teachers are grappling with the subject of how to handle controversial history in the classroom, and of course, it is the theme of this year’s conference in November 2020. At EuroClio we like to keep an eye on educational innovations, and we are delighted to e-meet with Michael Davies (UK) and Theo Cohen (France) to talk about Parallel Histories, a UK educational charity which aims to change the way we study the history of conflict.

Michael: I set up Parallel Histories as an educational charity in 2017 in order to change the way we study history, and in particular, the history of conflict. 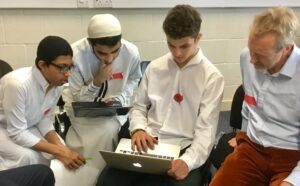 I was frustrated that controversial historical subjects were gradually disappearing from the UK school curriculum when I knew from personal experience that these were exactly the historical subjects which students loved to study. For example, many British schools in 2014-2018 gave close attention to the history of the First World War, but no attention at all to the centenary of the Balfour Declaration in 1917, the consequences of which have shaped the Middle East and underpin the ongoing conflict between Israel and Palestine and still cause controversy in Britain today.

Research showed us that the main reason teachers avoided controversial subjects such as Israel and Palestine was that they felt ill-equipped to teach it without exposing themselves to the potential accusations of bias, and in some cases they worried that bringing the study of conflict into the classroom would stir up trouble within the school or in the wider community.

So, with those obstacles in mind, we set out to create a teaching methodology which would:

The core idea in the methodology is that we retell the standard history of a conflict as two parallel but competing histories. We then place them side by side for students to compare, contrast, analyse, debate, and ultimately form their own historical judgment. We believe that the very best place for controversial subjects to be discussed is in the classroom and that this gives teachers an opportunity to show students how to critically evaluate competing evidence and how to debate with each other robustly, but respectfully. We believe that all of these skills are increasingly important for young citizens in pluralistic democracies.

We understand that history teachers have always shown their students a range of alternative viewpoints and interpretations about particular historical events or people, and we want to build on that tradition by making the learning process more immersive so that students will understand the complete and cohesive historical narratives of both sides. 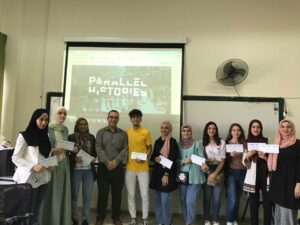 Alice: Where did the idea come from?

Michael: As a teacher, I was struck by the powerful impact on my students which came from visiting areas of conflict like Belfast, or Israel and the West Bank and talking to opposing sides about their history. It really brought alive the importance of history and its uses – both good and bad.

I guess I have always been interested in identity and conflict - I spent formative years as a child in Northern Ireland as the Troubles began. I have a very clear memory of my father taking me aged nine to see the aftermath of the previous night’s rioting on Bombay Street in Belfast. The sight of a Catholic family carrying their furniture out of their terraced house with its smashed windows and loading their possessions onto a lorry to make the move to a safer area made a profound impression on me.

Alice: What has been the impact so far?

Michael: Parallel Histories is used in over fifty schools in the UK, up from twenty last year, and we think it will be over eighty by the end of this year – we have begun to feel that we are now pushing on an open door. We organised some online training – it filled up in two hours and we have had to run seven further sessions to cope with demand. I believe that this interest must be the same in the rest of Europe given that the central theme of this year’s EuroClio conference is ‘Controversy and Disagreement in the Classroom’. We have also used it in an Israeli and Palestinian university and as teacher training for an international school in Israel, but at this point it’s not possible to use it in Israeli and Palestinian schools. 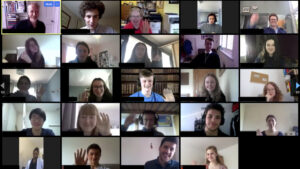 Alice: How have you responded to Covid19?

Michael: We have been running inter-school debates on zoom involving schools mainly in the UK, but also France, Ireland and Turkey. Teachers have found this a good strategy for keeping their older students involved, especially the ones for whom exams have been cancelled and there is no planned return to school.

We have also had the chance to work on some new controversial topics like the Parallel Histories of the Union between Scotland and England told from Unionist and Nationalist perspectives, and we have started to work with HTANI (History Teachers Association of Northern Ireland), another member of EuroClio, to create a Parallel Histories of Northern Ireland told from Catholic and Protestant perspectives. 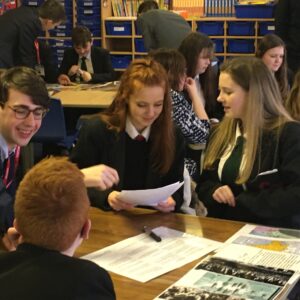 Michael: We would like to work with EuroClio and find partners in other countries who would like to develop this model and methodology in their own language and designed for their own school systems. Our work with Theo Cohen in Lyon is a very good model for this. We all share the same philosophy and belief in the key elements of the methodology, and Theo has been able to take our English language resources and reformulate them as part of a teaching programme designed to meet the very specific requirements of the French educational authorities and the French school system. 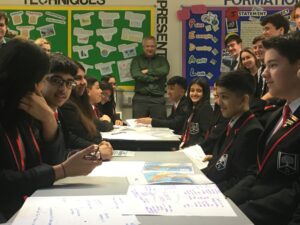 Alice: Why did you choose to get involved with Parallel Histories?

Theo: I thought, here’s a programme which is very relevant to solving a challenge we face in French schools right now – we have to teach about Israel and Palestine (unlike in the UK where it can be avoided because it is too difficult), and I don’t think in general we do it as well as we could – at least I am sure I don’t!

As a high school teacher, I am regularly challenged by my students' views, passion and sensitivities whilst teaching the Israeli-Palestinian conflict. Indeed, this conflict is extensively covered by mass media in France while being regularly on the top of most discussed topics on social media. This is partly due to France’s demographic specificity with the largest Muslim community in Europe and the 2nd largest Jewish community in the world outside Israel. Often students come into the classroom with a strong sense of identification with one side or the other and can view any challenge to their received understanding coming from a position of hostility.

Nor are the textbooks any help. It’s the same problem in France as Britain - traditional history textbooks by aiming at a so-called "balanced view" leave out the historically-rooted perceptions underlying the protagonists' actions on each side, and so leave students with an inadequate explanation for the intensity and intractability of the conflict.

So a couple of years ago I was feeling, here is a really important historical topic with profound impact on French society today and yet we are in a position where many teachers feel poorly prepared to teach it, the official textbooks are no help, and we run the danger of making our students feel we are hostile to the historical narrative of their own community and that we are not listening. 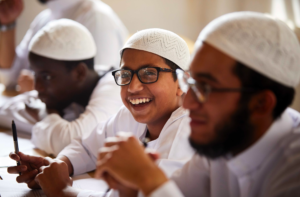 So, I started to research and I came across Michael and Parallel Histories – we talked about all of this one evening and immediately hit it off – I found the Parallel Histories approach to teaching very refreshing personally, and absolutely appropriate for teaching a highly controversial subject like Israel and Palestine.  Unlike a top-down pedagogical approach which revolves around an impossible objectified vision, learners are presented with competing historical narratives, leading them to engage with the available historical materials in order to formulate their own opinion. This helps them to develop their ability to critically analyse the arguments, assess the evidence made up of the documents provided to them and synthesize different stories. Parallel Histories is not about teaching students what to think, but how to think. We give them the tools to deconstruct their own and other historical narratives to better understand how the historical interpretations which underpin conflict are constructed

Alice: Do you provide ready-to-use in materials in French?

Theo: Yes. I felt it was important to make ready-to-use materials dedicated to French-speaking students and teachers. They all have been designed to be in line with the new French curriculum of History and Geography and the new subject “Histoire-Géographie, Géopolitique, Sciences Politiques”.

As of now, three chapters in French are available on a dedicated page: https://www.parallelhistories.org.uk/le-conflit-israelo-palestinien

The use of our videos is really flexible but we know from our practical experience that these videos can be used in a 4 to 6 hour timeframe of work. There are more details and ideas for lessons on the French page of our website, and we are available to answer any questions or provide further materials, if needed.

Alice: What is your teaching experience so far with Parallel Histories in France? 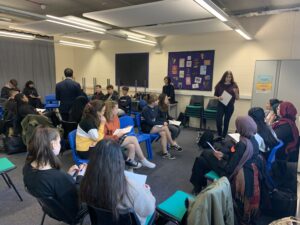 Theo: I’m very happy so far. Of course, the first place any teacher tries out new material is his own school and my students have been very supportive. They enjoy this approach and push me to get on with creating more programmes. We have also been taking part in an online debating programme with schools in the UK, Ireland and even Turkey, and I have been very proud of the way my students have risen to the challenge of not only debating these difficult topics but doing it in English, too. We were fortunate to get some Erasmus + funding for a project with British and Irish schools, and we are planning (Covid permitting) for an international conference next year.

We put our materials online earlier this year on a dedicated French resources page and this has generated many new enquiries. Teachers from Brittany, the Lille urban area and French schools abroad (Lycée Français de Rome, de Bruxelles, d’Irlande…) expressed strong interest in using Parallel Histories in class. We also have some official recognition – we are proud to be part of the official teacher’s trainings catalogue in the Académie of Lyon, which is the country’s 2nd largest urban area. Our materials are also used by numerous schools in Brussels, as Parallel Histories tools and approach are now fully integrated into Belgian NGO’s training programmes dedicated to school learners and teachers.

Theo: The core idea of Parallel Histories is the same in every country – to change the way controversial topics are taught and learned in classrooms. To achieve this in France we set up three goals: