This week, activists in Europe and the United States attacked statues of historical figures because they are seen as colonialists, imperialists, slave-traders, and racists. Will these symbolic acts result in the structural and systematic changes that are needed?

A monumental movement is sweeping the world. Sparked by the death of George Floyd and propelled by widespread public outrage at systemic racism and police brutality, statues that blended into the scenery for the average person have been vandalized, toppled, stomped on, and – in the case of Bristol's Colston statue – dragged through the streets and dumped into the harbor. These acts appear to have brought years of debate about these statues to an abrupt conclusion – they must fall. But is this the most effective measure to achieve the aims protesters are seeking?

Soon after the removal of Colston, a protester left a sign on the doors of Oxford’s Oriel College that read "Rhodes, You're Next". Thousands of protesters are demanding its fall as we write this piece. In Virginia, we witnessed the statue of Columbus set alight and thrown into a lake. The transnational nature and broad applicability of the movement’s message are clear. Related protests have touched numerous countries with a history of racism, imperialism, and colonialism – Cecil Rhodes in South Africa, James Cook in Australia, Leopold II in Belgium, Columbus in Argentina, and Confederate monuments in the United States, to name just a few.

Many of these figures glorified in stone were heralded for their heroic actions, philanthropy, or other accomplishments without acknowledgment of the human rights violations committed in achieving these deeds. Erected to honour the conquests and wealth that brought their countries and themselves fame, the injustices these “heroes” committed remained for most of their tenure camouflaged, but not for everyone. For many, these statues symbolize the deep systemic and structural inequalities rooted in historical legacies of slavery, racism, colonialism, and imperialism.

Of all the measures that can be taken to protest controversial statues, removal and destruction are the most extreme. There are in situ remedies that facilitate important educational discussions and contribute to awareness raising of historical wrongdoings. Placarding, additive elements, or counter monuments can serve to contextualize historical legacies, fostering debate and discussion. The statue of Josephine Bonaparte in Martinique, erected in 1859 to honour the French empress in her native land, has been decapitated several times over the last decades for her alleged actions to convince Napoleon to re-instate slavery. She now remains headless and splattered with red paint as a symbol of  France’s culpability in the slave-trade. In 1956, during a revolution in Hungary, 100,000+ protesters destroyed a famous statue of Joseph Stalin, leaving only his giant boots. A monument to these empty boots now stands in the Memento Statue Park in Budapest as a reminder of Soviet occupation. In Paraguay, a statue of Alfredo Stroessner, whose vicious reign of terror lasted from 1954 to 1989, has been crushed into a huge block, face and hands visible, in the place where the original once stood as a reminder of the crimes he committed. Additional remedies include moving statues to museums and including protest signs, images, and videos for display in an exhibition.

Such measures, however, may not feel sufficient for those outraged by extrajudicial killing, police brutality, and systemic racism against Black people. What is the destruction of stone when compared to destruction of life? The removal of a statue may appear to be the only act that does justice to the severity of the situation.

There are also those not part of the movement who have chosen to remove statues preemptively. Violating Alabama state law intended to protect memorials, the cities of Mobile and Birmingham have taken down Confederate monuments. The University of Alabama has removed plaques honoring students who served in the Confederate Army and released a statement saying they “will be placed at a more appropriate historical setting”. In Virginia, the removal of a slave auction block and the infamous Robert E. Lee in Richmond is underway.

Other policy-makers have chosen not to make ad-hoc decisions and opted for research and consultations on how to deal with contentious monuments. We applaud Mayor Sadiq Khan in London and the authorities in England, Scotland, and Wales who decided to form commissions to appraise monuments in their cities or regions. A consultative process with a clear mandate that includes representatives from aggrieved groups can contribute to greater social cohesiveness.

In the long-term, the question remains: what does the removal or erasure of a statue or monument accomplish? It does not alleviate the underlying grievances dividing a society. Without structural changes in justice, policing, social, and educational systems, removal will be a Pyrrhic victory, a purely symbolic act. When the statue is gone, how will we remind the public of past injustices and the connected, pervasive issues that remain? In contrast to the statues that were partially removed, there is nothing to remind people who visit the University of Cape Town of the issues raised by the #RhodesMustFall movement. Whenever a statue is removed, the question should be asked, what should be put in its place?

There are more than 80 cases in Europe, Africa, Asia, Australia and the Americas of contested histories related to the legacy of colonialism, imperialism, slavery, and racism and an equal number that deal with the legacies of fascism, communism, genocide, human rights violations, sectarian violence, and authoritarian regimes.

Those who suffered from egregious wrongs and their descendants are calling for restorative justice. When their voices remain unheard, they will protest and direct their pain towards the symbolic representations of their trauma – the figures we have placed on pedestals. The fact that these protesters were joined by allies outside their communities this week, gives hope that more sustainable change can be achieved.

Educators, civil society activists, and community leaders each have a responsibility to raise awareness and facilitate open discussion and public debate about contested historical legacies. We, as educators, know that history is not confined to classrooms. Current events provide us with a valuable opportunity to show our students that history and the way we choose to remember it is not about memorizing dates and names, rather it is an evolving process that impacts our lives in ways that truly matter. Failing to teach the past in a multiperspective and inclusive manner will contribute to the silencing of invaluable voices, foment unrest, and leave marginalized members of the public feeling their only recourse is to remove tangible manifestations of whitewashed history. We cannot continue on in this way.

This piece was written with contributions of the staff (Andreas Holtberget, Alice Modena, and Catherine Savitsky) and the team working on the Contested Histories project (Lorraine Besnier, Catalina Gaete, Grace Sahota and Katria Tomko).

Copyright free images that may be useful: 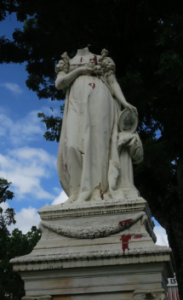 The headless statue of Josephine Bonaparte in Fort-de-France, Martinique. (Terrazo, CC BY 2.0) 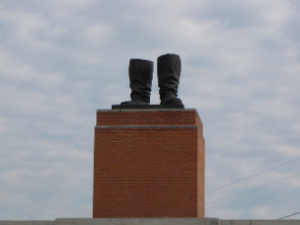