Following our in-depth article Can video games improve history education?, EuroClio will publish reviews of games that can be of use in the classroom. First up, Crusader Kings II!

It is August 7th, anno domini 936. You are Dirk of the House of Gerulfing, Duke of West Frisia. Despite your venerable age of 69 years, you remain sharp-witted and fit. You are doted on by your much younger second wife, the 21-year old Gerberga. Together you raise your 16-year old son (also named Dirk), who is growing into a well-mannered, if shy and overweight, young man. Your ruler, the ambitious Otto I, King of the Germans, gives little thought to your backwater lands. All the better, you think, as you are much more interested in promoting local trade instead of war. But dark clouds are on the horizon, as once again the kings of Europe prepare to fight over the legacy of Charlemagne’s empire. 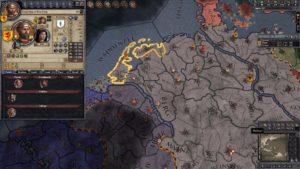 The story of Dirk Gerulfing is just one of possible millions in the grand strategy game Crusader Kings II, developed by Stockholm-based developer Paradox Interactive. First released to modest sales and critical reception in 2012, it has since become one of the most successful historical strategy games of all time, selling one million copies by 2014, and continuing to perform strongly in the years since thanks to support from its developers.

The secret to Crusader Kings II’s success is likely the uniqueness of the game itself. There is no shortage of games set in the Medieval Ages, but whereas the overwhelming majority focus on putting the player in the role of a knight swinging swords or a general leading armies, Crusader Kings II instead takes a much more human approach. It has no written plot, no set objectives, and even the player character has no “chosen one” status. Crusader Kings II aims to be a holistic representation of medieval life, and its exactly this flexibility which can make the game valuable to educators.

How is it Played?

At its heart, Crusader Kings is a dynastic simulator – the player takes control of a single individual, usually a nobleman or noblewoman. and guides them through life. They do this by reacting to events, as well as the actions of other, computer-controlled individuals in the world around them. There is no way to “win” the game outside of a player’s own goals, and the player can only “lose” if their character lacks an heir or their last piece of land is taken.

Both the fun and the potential for learning come from how the player chooses to interact with the world around them. For example, a player in the position of Duke of Burgundy decides he wants to become the King of France. To do this, the player arranges a marriage between his son and the King’s daughter, only for the player’s son to declare that he is becoming a monk and breaking off the marriage. The player then is left with other options – does he fabricate a claim to the throne and have other nobles push for it to be recognized? Does he start a secret plot to arrange a rebellion? Or does he instead try to become good friends with the King, hoping the friendship is repaid later?

The gameplay of Crusader Kings II has been described with terms like “sandbox” or “emergent storytelling,” but both are ultimately grounded in the game’s representation of the medieval world. The standard game covers a time period stretching from 936 to 1453, while expansions can push the start date back to 769. Geographically, the map includes not only all of Europe, but also Northern and Eastern Africa, the Middle East, India, and Central Asia.

For this reason, students using the game in an educational context are not given a strictly Eurocentric perspective – a player can be part of the Islamic world, pagan Lithuania, or Buddhist Sri Lanka with almost as much detail as that given to Catholic Europe. Furthermore, the social and cultural elements driving the game also means the interactions with these cultures are not just warfare. For example, players and computers alike are rewarded if they follow Christian virtues if they are Catholic, or if they go on hajj as Muslims, among many other options. Through this, the game naturally weaves learning about cultures and religions into its gameplay, instead of simply presenting the information on the page of a textbook.

Nevertheless, the game does have its limitations in representation. It is impossible to play in the role of a peasant, or even lesser notables like a town merchant or baron. The game’s focus on the upper nobility limits playable characters to the ranks of “count” and above, with equivalents in other cultures. Players and educators should be aware of this bias as while the game provides a unique social-cultural angle unseen in other titles, it is largely limited to the elite. 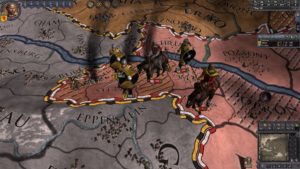 An obvious concern when it comes to using video games as an educational tool is the feasibility of running the game in the first place. Fortunately, Crusader Kings II, is neither technically demanding nor very expensive. Now being almost eight years old, the game should have little trouble running on almost any computer built in the past decade. Furthermore, the developers are aware of the game’s popularity among history educators and have implemented a policy through which it can be provided for free or very discounted to schools that contact them.

Another concern is the game’s suitability for students in terms of its content. Though Crusader Kings II has a PEGI rating of 12+, the game discusses mature subjects which may not be suitable for younger students. Though it does not feature graphic violence or sexual content, it is discussed indirectly through text. For this reason, Crusader Kings II is best fit for, at minimum, students in secondary school. Given similarities in subject matter, students who are expected to read Shakespeare’s Macbeth would likely have the maturity and skills to enjoy Crusader Kings II as a supplemental educational tool.

Crusader Kings II provides a unique experience not only among other video games, but also as an interactive tool with which to provide greater context for students about the medieval world. The word “context” is key – the game does not provide a retelling of exact historical events, but rather creates a system in which medieval life is shown to the player through the people, geography, faiths, and cultures of the medieval world. This is both a limitation and one of the game’s greatest strengths, as it provides a fun and intuitive way of teaching students about the underlying factors which influenced medieval history across the globe.

As for a practical example of how to implement a game like Crusader Kings II in a classroom, Paradox Interactive provides an example from one of their other titles. In 2010, the University of California began using the Second World War simulator Hearts of Iron II to help undergraduate students understand the geopolitics in an interactive manner. The program received good reviews from both students and teachers, crucially engaging even students who otherwise do not play video games.

As the modern classroom integrates more multimedia approaches to complement teaching, video games provide a clear avenue of expansion for enhancing student engagement and interest in the material being taught. Those interested in teaching medieval history will find a great tool in Crusader Kings II not only for its attention to historical detail and wide scope of covered topics, but also its easy accessibility both technically and financially through collaboration with its developers.

Adrian Piecyk is a graduate of the University of Toronto, holding a Masters degree in Eastern European and Russian Affairs and a Bachelors of History. Though his research interests primarily cover Eastern Europe in the early 20th century, his fascination with medieval life has made him a long-time fan of Crusader Kings II, and he hopes this review may inspire you to try the game for yourself. Adrian can be reached directly through email (adrian.piecyk@outlook.com), or over LinkedIn.