Formal history education is mainly based on textbooks and teacher exposition; however, an increasing number of different resources are being used by educators to supplement their teaching. Among the various media employed, novels and films are certainly the most popular among teachers. The Historical Association, the main History Charity in Britain, provides a twenty pages list of historical fiction ranging from medieval sagas to modern day Afghanistan, “to help history teachers to inspire students of all ages in secondary school to read historical fiction for pleasure and also to get better at doing history”. Films too have long been utilised in history education since, according to recent research, movies were screened in classes already in the 1920s (R. Paxton and A. S. Marcus, 2018). Films are especially praised because visual information is more easily retainable than written information and, therefore, screenings can significantly improve students’ learning. 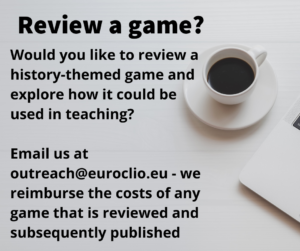 Introducing historical video games
Fiction and films remain the preferred media by history educators around the world, but another kind of resource is rapidly growing in popularity: historical video games. When we talk about historical video games, we refer to “those games that in some way represent the past or relate to discourses about it” (Chapman, 2016), games that start “at a clear point in real world history” and in which history has “a manifest effect on the nature of the game experience” (MacCallum-Stewart and Parsler, 2007). A large number of video games are set at different times and places in history, making them potentially valuable teaching tools. Players have almost unlimited possibilities: they can build the Colosseum in Minecraft, thus learning about Roman architecture as well as raw materials, or they can found, organise and defend a settlement in newly-discovered North America in Banished, or they can liberate Nazi occupied Europe by seemingly stepping in the shoes of an American frontline soldier in Call of Duty.

Although not (yet) as common in history classes as other tools, video games are attracting the attention of educators, particularly among the young generations, and academics too. Teachers who have experience using historical video games in class have started recommending them to their colleagues (see for example, the blog gamingthepast.net, or the youtube channel Histoire en Jeux), while researchers discuss how game playing influences students’ learning. Despite widespread interest and the availability of a wide range of historical games, ignorance and scepticism still characterise the attitude of many history educators towards video games. In this short article, we will address some of the main concerns about historical video games and suggest how they can benefit history learning with the help of Pieter van den Heede. Pieter, once a teacher in Belgian high schools, is now a lecturer at the History Department of Erasmus University Rotterdam, and his doctoral project focuses on the representation and simulation of war history in digital games.

Practical issues
First of all, let’s consider practical issues that may discourage teachers from using video games. Games have technological requirements that make their utilisation in class more complicated than that of, for example, movies. Schools may be unable to afford computers with sufficient hardware requirements (such as graphics cards, central processing unit, and memory) necessary to play modern video games. Although a service called Google Stadia has been developed specifically to allow users to stream games to any device, regardless of their technical specifications, it has not been very successful until now. Moreover, options of games can be limited to console/system compatibility, with some games exclusive to specific consoles. Managers are often reluctant to spend part of their limited school budget on the purchase of expensive equipment for game playing. Such reluctance may not only be due to financial constraints, but also to criticism towards the use of video games from the managers themselves, from teachers and parents and, surprisingly, from students, who are generally sceptical about the ability of games to improve their learning experience. Finally yet importantly, time constraint is also an issue. Teachers, who already struggle to keep pace with the strict timeline of curriculum implementation, find it challenging to allocate enough time for their students, who may be unfamiliar with the designated game, to learn how to play.

How video games can benefit history teaching
Regardless of the practical difficulties of their utilisation and their negative reputation, research shows that video games can significantly improve students’ learning experience. It is certainly easy to appreciate how they can teach a lot about material culture. Some games, which can be described as having a realist approach to the past, rigorously represent physical objects and environments, while also being consistent with broad historical narratives. Famous examples include the Assassin’s Creed series, featuring a variety of historical periods and situations such as, for example, Ancient Greece, feudal Japan, the Spanish Inquisition and the American Revolution, and allowing players to learn the functioning of a musket or to see the view from the trenches during World War I. This series centres on a fictional core narrative (about a clash between two secret societies, the Assassin’s and the Templars) that is set in accurately portrayed historical time periods. But according to Pieter van den Heede, the real added value of video games lies in the fact that they allow players to, for example, experience a sense of historical contingency and the path-dependency deriving from it. For example, in the Civilization series, the player will manage to build an empire only if he acquires and applies knowledge about, among other things, how geographic conditions affect the foundation and development of a city in ancient times. This approach can effectively convey the necessities, connections and general conditions that influenced past outcomes by creating an authentic “practice field” for solving problems and using real-world contexts and tools, thus helping students understand why historical figures made certain choices.

The shortcomings of video games and practical advice
Despite his passion for gaming, Pieter admits that, while historical video games have a considerable educational potential, they also have relevant shortcomings. For example, games are generally inadequate to teach social and cultural history. Since most players are interested in heroic roles and adventures, they prefer to play characters whose decisional power can significantly influence the game’s outcomes. Conscious of this, most companies produce games whose protagonists are kings, explorers and generals, rather than peasants or nuns. This inevitably leaves out of the picture the majority of members of past societies, preventing students from learning about their lives and role in history. For example, while it is possible to play female combatants in recent World War II games such as Battlefield V, it is not possible to learn about women’s experience of the conflict in more ordinary and common situations, such as replacing men in factories. It is possible that, as Pieter wishes, these experiences will be included in future games.

Another problem with video games is that they generally struggle to convey values alternative to those of modern western societies, and indiscriminately apply our mind-sets to different realities. This implies that players’ choices may influence the narrative of the game in ways that may be incompatible with historical evidence, and in the end, the outcome may differ significantly from real events. It is, therefore, important that students realise that they play a fictional character in a fictional role, and that they may make choices that the real protagonists of the events represented in the game did not or could not make. Moreover, Pieter recommends that students are given the opportunity to discuss their experiences during and after playing in order to compare their outcomes, debate the games’ historical accuracy and overall representational strategies as well as the intentions of its developers. In other words, the shortcomings of historical video games can be as valuable as their qualities for instruction, especially if students are made aware of how the games they play contribute to learning outcomes.

Ultimately, whatever the advantages and disadvantages of video games may be, teachers play a central role in unlocking their potential as educational tools, and it is thus essential to empower them. After all, teachers are those ultimately in charge of delivering instruction. They should be given the freedom, the time and, when the school budget allows it, the means to incorporate games in their lesson design if they so wish. But, as Pieter stresses, video games are just one of many tools available, and teachers should also feel free not to use them.

Written by Cecilia Biaggi, postdoctoral trainee at EuroClio and a Marie Sklodowska Curie Researcher in the LEaDing Fellows COFUND program at Erasmus University Rotterdam. Cecilia is particularly interested in minorities and nation-building, political history and education.