By Huibert Crijns, Koninklijke Bibliotheek, National Library of the Netherlands

Arius van Tienhoven only just graduated as a doctor at Leiden University, when in 1912 the Balkan War breaks out. Van Tienhoven doesn’t hesitate for a moment. He collects an amount of money, buys himself a medical equipment, and travels directly to Serbia. He offers his services to the Serbian authorities. He receives a warm welcome and is put to work in a military hospital. The whole medical staff there is formed by two students. The equipment consists of two tweezers, two scalpels and one razor. Almost immediately trains arrive with hundreds of wounded from the battle of Kumanovo. After a few weeks the Dutch Red Cross sends a medical team to support Van Tienhoven. Under his leadership they found their own hospital in a school building in Belgrade and provide medical service to wounded soldiers. 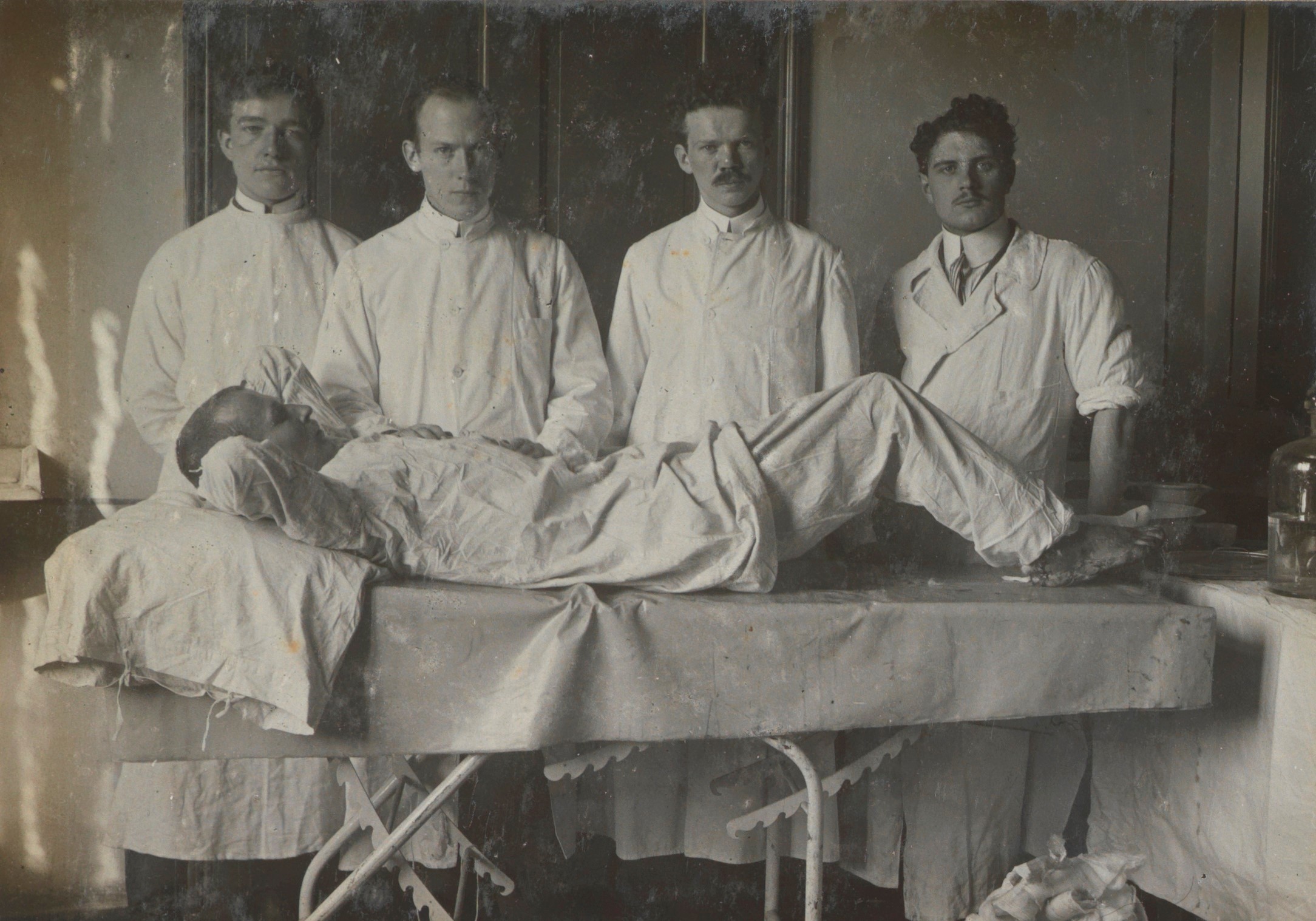 Arius van Tienhoven (standing, second from left) is a well-known person in the Netherlands from 1912 on. In the 1920’s he sinks into oblivion as a result of his emigration to Venezuela, where he works for the Shell oil company. In Serbia however his memory is still kept alive. Van Tienhoven not only is an idealistic and adventurous doctor, he also is a gifted photographer. Using his pocket camera, something very modern in this time, he photographs all the events taking place. Later he glues the photos in albums and adds captions. He also publishes in several Dutch newspapers on his experiences. The photo albums in combination with the newspaper articles tell a fascinating story of dedication, sense of duty, adventure, suffering, war and love in early 20th century Serbia.

The photo albums of Van Tienhoven are discovered only recently. In 2015 they were donated by the grandchildren of Van Tienhoven, living in the US and Mexico, to the Koninklijke Bibliotheek. They were never published before and their existence was not known. The photo albums are presented now on the website of the Koninklijke Bibliotheek: www.kb.nl/tienhoven. The newspaper articles can be found on www.Delpher.nl.

Also during the Second Balkan War Van Tienhoven is present in Serbia. History repeats itself in 1914 when Austria declares war on Serbia, the beginning of the First World War. Van Tienhoven, who is in Berlin at that moment, telegraphs his regular assistant, Nurse De Groote. Already on the next day she boards the train to Berlin. Together they travel to Serbia, soon followed by other Dutch Red Cross staff. In the city of Valjevo they start a hospital in the local gymnasium. 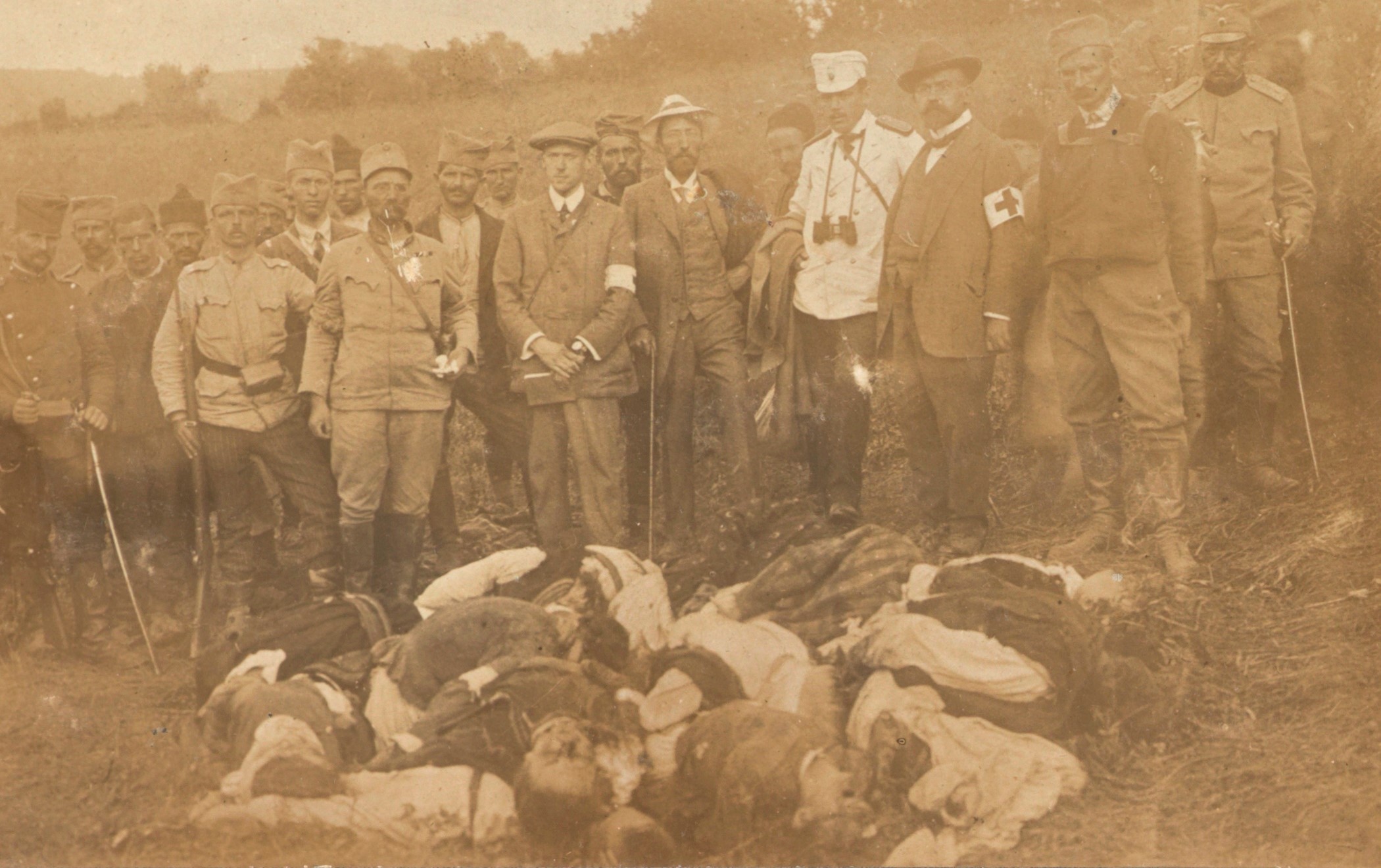 Van Tienhoven (in the middle with white arm band) participates in 1914 in what he calls himself the ‘horror committee’. Commissioned by the Serbian army, this committee investigates Austrian war crimes. As evidence Van Tienhoven makes pictures of dozens of raped, tortured and killed civilians. To the left of Van Tienhoven stands the captured Austrian major Josef Balzarick. He was accused of being responsible for the atrocities. Shortly after this picture was taken he commits suicide. 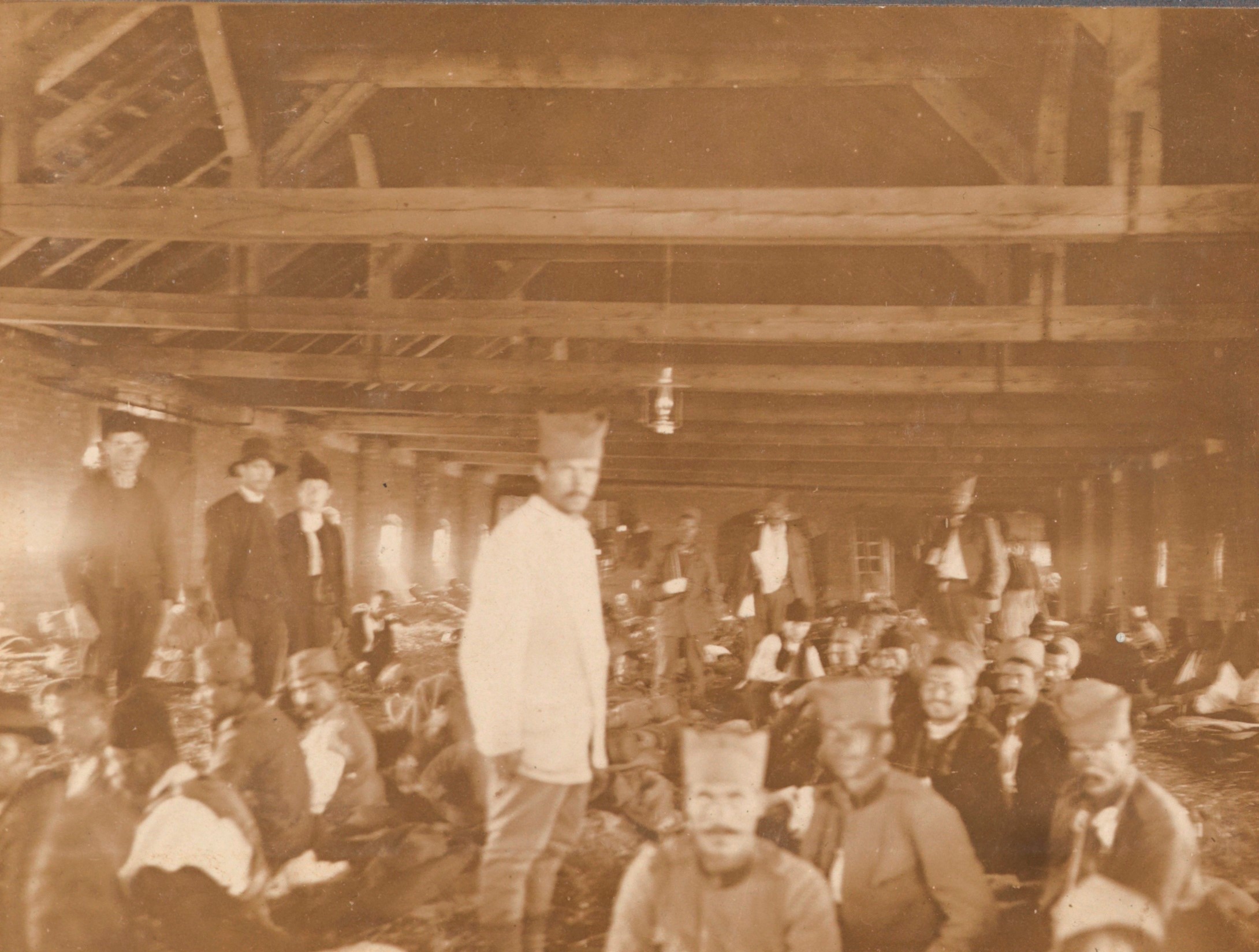 On 2 September 1914 800 badly injured soldiers were brought to a nearby ammunition store. Van Tienhoven goes there to select the ones urgently in need of help: ‘What a tragic situation. This entangled mass of greatcoats, soaked in blood, on the straw like cattle. On the first floor, where three layers of shelves normally served to store ammunition, the wounded are now crowding on the bare wood. Wounded are everywhere, without bandages, paralyzed, blinded, intestines bulging out, the dying, the dead. It is terrible I cannot operate more than ten in one day.’ 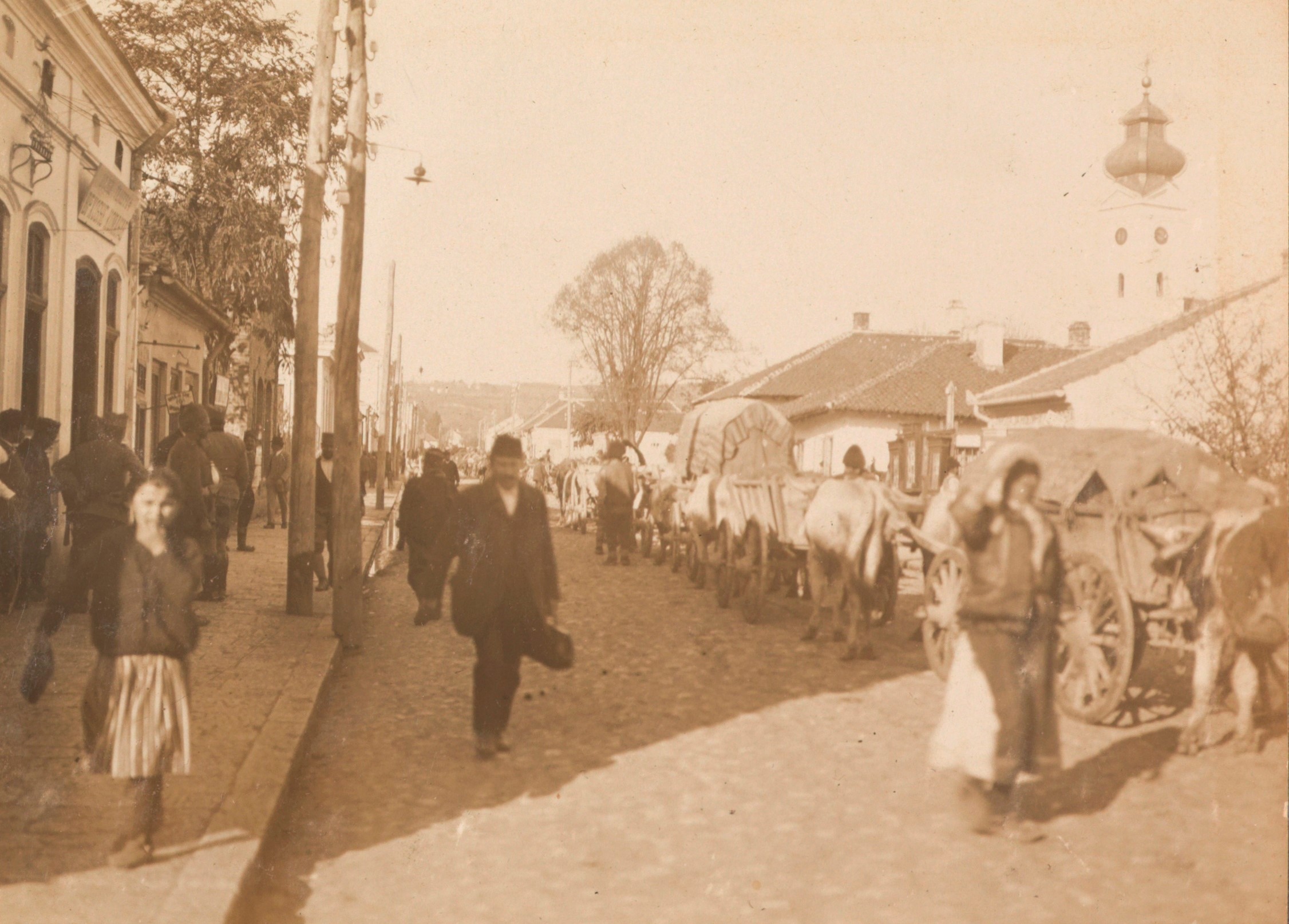 From the end of October 1915 ten thousands of Serbs start fleeing for the advancing Austrian army. Van Tienhoven takes pictures as a stream of refugees is passing Valjevo. He writes: ‘In the afternoon we see them coming, the poor procession of thousands and thousands, women and children, the sick, the disabled, by foot, exhausted, some saved belongings on the neck, in wagons with furniture. And they are starved, but there is no food for these endless masses. In a slow queue the refuges endlessly drag along the streets, sit down in despair, collapse never to stand up again.’ 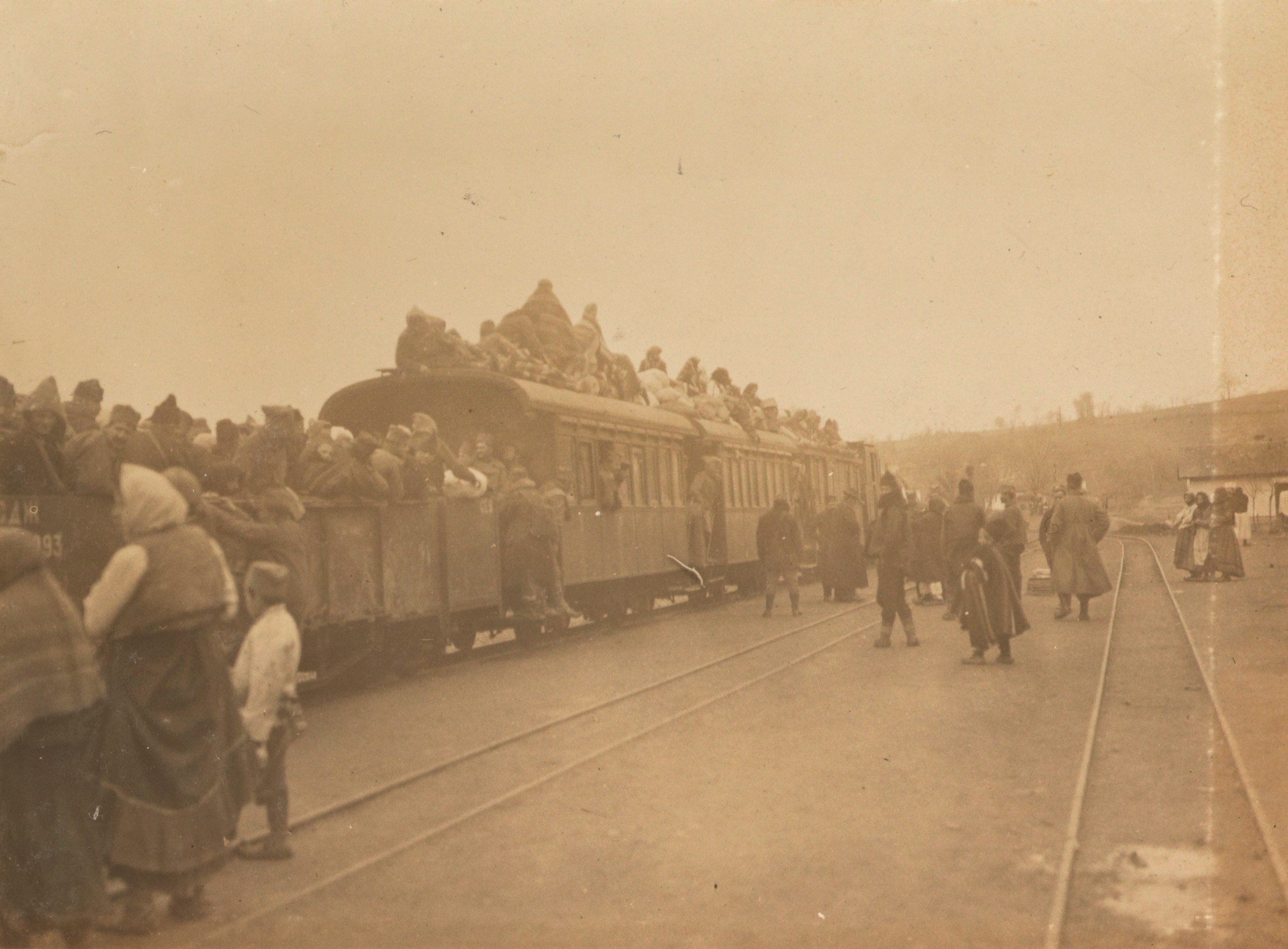 Early November 1914 Valjevo is run over by the Austrian army. Van Tienhoven photographs the retreating Serbian troops. He hesitates himself. Do they have to fear the Austrians or will the Red Cross status protect them? Finally Van Tienhoven and his staff decide to leave. The roaring of the guns sounds close already. A freight wagon is hooked to the last train from Valjevo, in which they stow twenty cases with their medical equipment and find ample space to unfold their mattresses. The Dutch medical team is evacuated to Nish, were they work in another military hospital. After a few weeks the Austrian army is driven back again, after which they return to Valjevo. 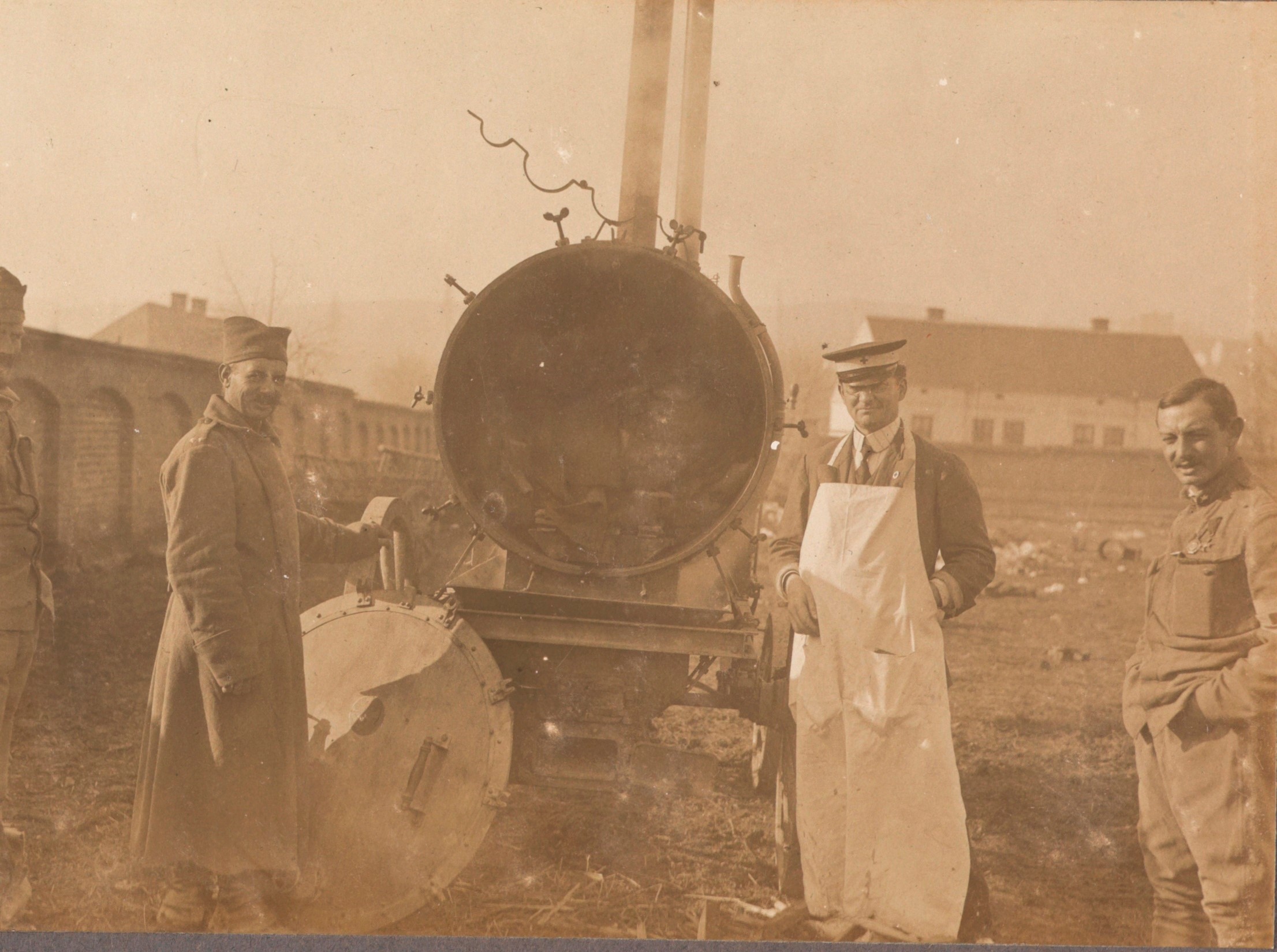 The basic principles of hygiene are already common sense in the medical branch in 1914. The Dutch male nurse, Mr. Henken (with apron) next to the sterilizer which was used to disinfect the hospital linens. The hospital building is also disinfected regularly. Nevertheless in 1915 a typhus epidemic breaks out in Valjevo. Both Van Tienhoven and Mr. Henken are infected. Supported by the dedicated care of nurse De Groote Van Tienhoven recovers. Nurse Henken however will not survive the illness. With high fever he returns to The Netherlands and dies there. 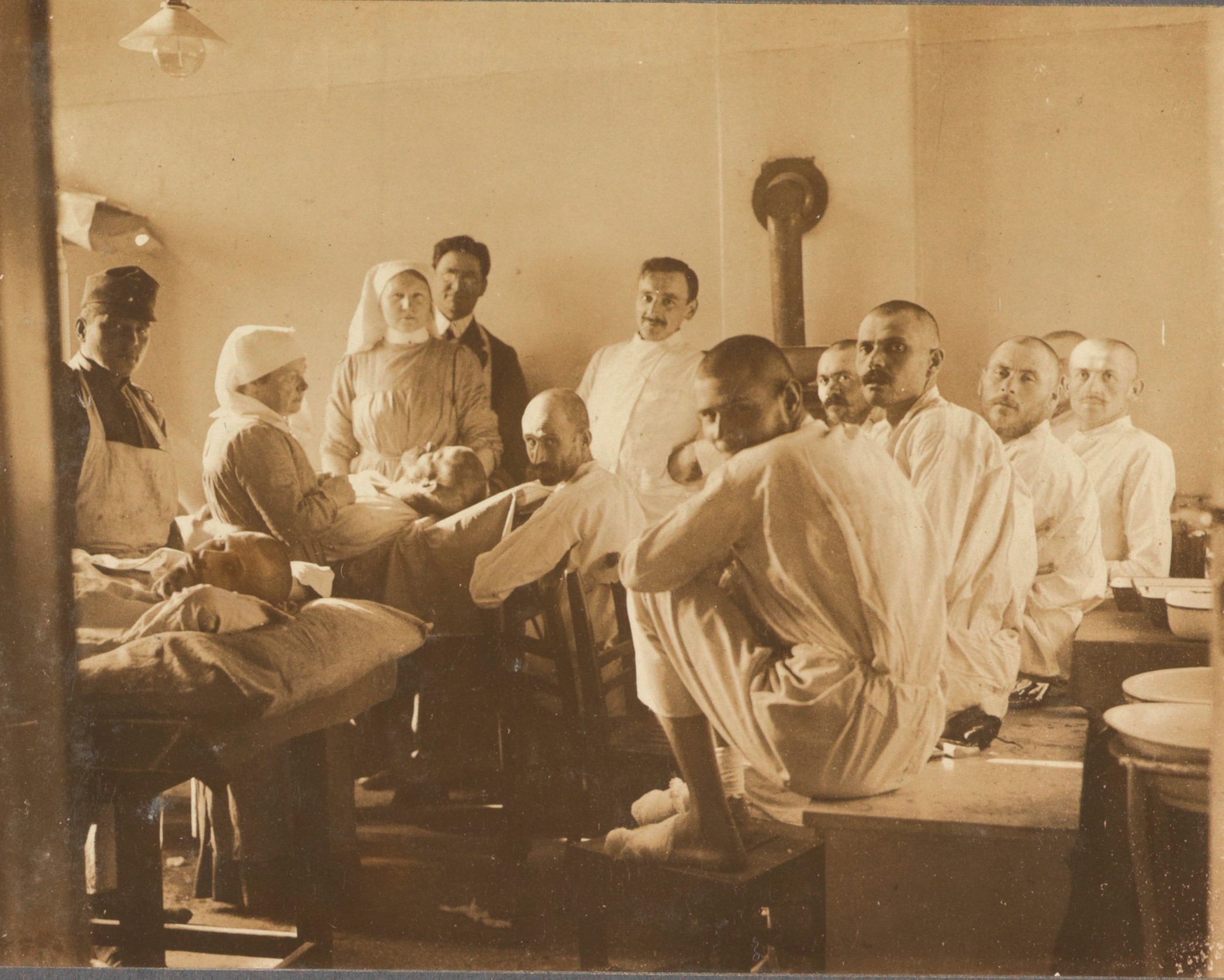 To prevent contagious diseases new patients are washed, shaved and deloused. For typhus is spread by lice. It doesn’t help: in 1915 there is an explosion of typhus. Because of the many weakened, filthy and underfed soldiers and refugees in the town, the spread of the disease is unstoppable, resulting in thousands of death. ‘Forty doctors died in Valjevo in ten days’ time’ Van Tienhoven explains. He knew most of them quite well. 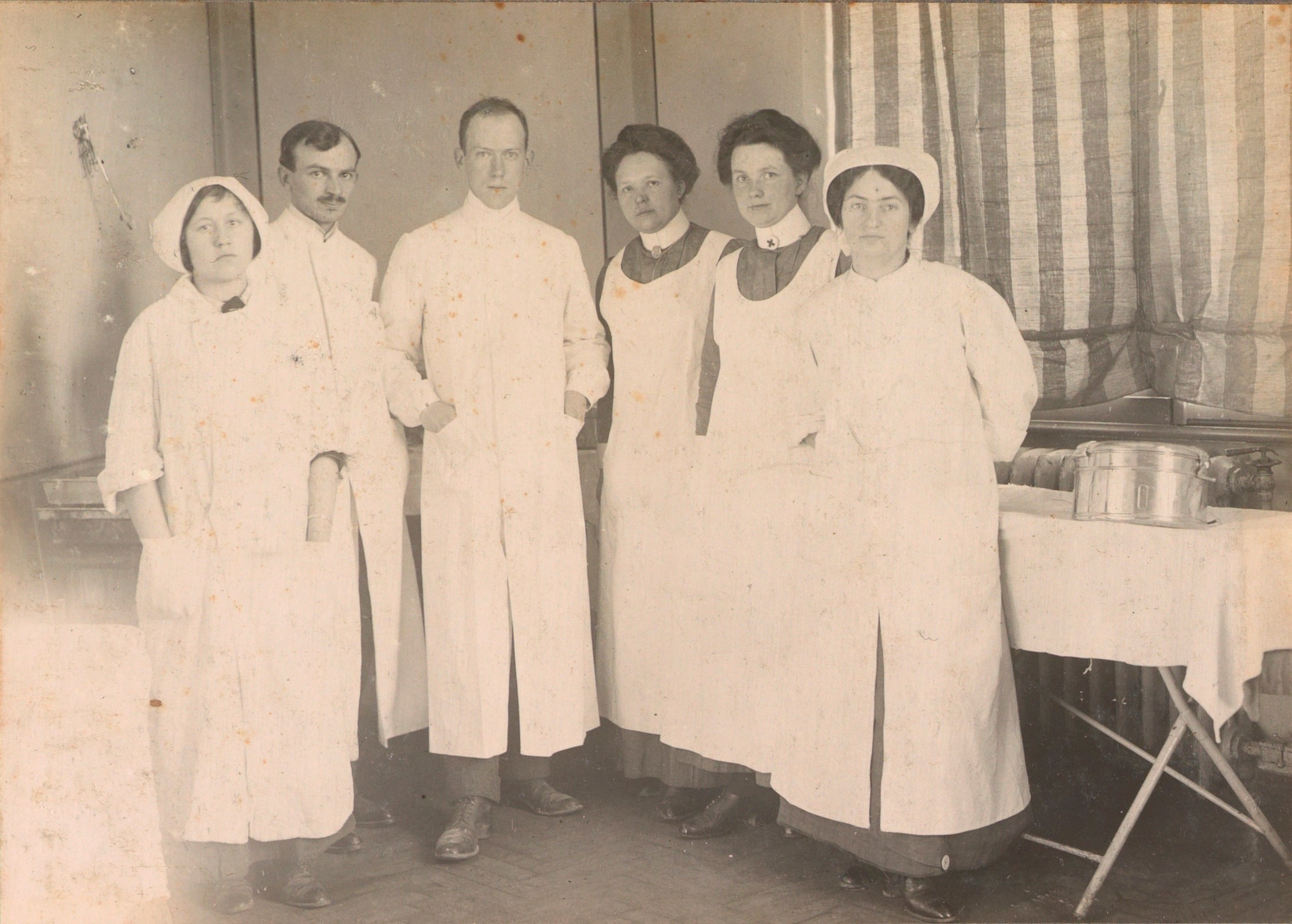 Second from right is Nurse Jacoba de Groote. Van Tienhoven (third from left) often writes about her: ‘Nurse De Groote, who witnessed three wars as a surgery assistant, never was one day in bed, never unwell, not even having a cold’. During the typhus epidemic she cares for him: ‘when the fever rose above 40 degrees Nurse De Groote wrapped me in the cold wet sheet’. If you read between the lines you understand it directly: Love is in the air. They marry in 1916 and have four children. Their children’s children now donated their photo albums to the National Library of the Netherlands.